Samoa recently became the world's 17th shark sanctuary, joining other countries in the effort to preserve threatened shark species within their waters.

In many places around the world, sharks have gotten a bad reputation as being voracious hunters who prey on humans. This misconception has been popularized in Western thriller and horror films depicting sharks, often great white sharks, as mindless killers stalking the oceans.

In reality, there are many different species of sharks, most of which are not dangerous to humans. In fact, of the over 500 known species of sharks, only 4 species have been recorded as having a number of dangerous interactions with humans. Many species are relatively small in size and are more likely to shy away from humans when in close proximity.

These misconceptions, as well as their popularity in many places as seafood, has led to the decline of many species by as much as 90%. To combat these issues, several countries have declared their waters as shark sanctuaries.

Shark Sanctuaries Around the World

Kiribati and the Federated States of Micronesia joined with the pre-existing Palau and Marshall Islands sanctuaries to form the The Micronesia Regional Shark Sanctuary in 2015 to span 2.5 million square miles of ocean water within the Pacific Islands. The first of its type, the overarching sanctuary provides a framework for the independent jurisdictions.

The 17 sanctuaries now protect a combined 7.5 million square miles of ocean. The Pacific Ocean holds the largest total sanctuary area with 6,609,309 square miles, followed by the Caribbean Sea with 520,959 square miles, and the Indian Ocean with 353,742 square miles.

Within these waters, commercial shark fishing is banned, along with retention of sharks caught unintentionally as bycatch and the sale or trade of sharks and shark products. These restrictions hope to reduce the over 100 million sharks killed by commercial fishing each year, as well as the protect over 70 red-listed shark species at risk of extinction.

There are over 500 species of sharks, the majority of which live in seawater. They are found in all the world’s oceans, with species inhabiting coastal regions, the open ocean, and even the deep ocean. Most species are carnivorous, with smaller feeding on fish, squids, rays, and crustaceans, and larger species feeding on large fish, sea turtles, seals, sea lions, and even smaller sharks, while some species consume plankton through specialized filter feeding. Although some are solitary hunters, many species are social animals, living together in large schools. The smallest known shark is the dwarf lanternshark at less than 7 inches in length, while the largest shark species is the whale shark, growing up to 40 feet in length.

The International Union for Conservation of Nature (IUCN) has red-listed 77 species of sharks, with 10 critically endangered species, 20 endangered species, and 47 vulnerable species. A further 57 species are considered to be near threatened. The population of some species has declined between 70% and 90% in the past 20-30 years, with half the world’s shark species thought to be at risk of overexploitation due to overfishing and overhunting.

The commercial fishing industry alone is known to kill 70-100 million sharks every year, with some believing those are conservative estimates, with the real number closer to double or triple that figure. Sharks are fished for their skin, organs, teeth, meat, and fins. Shark teeth make interesting souvenirs for tourists, and skins are used either tanned in leather fashion products or untanned as an abrasive known as shagreen. Shark livers are extracted for their oil, which is often consumed as a possible remedy for various illnesses, along with shark cartilage. The most common usage of commercial shark fishing is as seafood, with shark meat and shark fins eaten in many places around the world. Sharks are used for fish and chips in some parts of the United Kingdom and Australia, Iceland produces fermented shark meat delicacy known as hákarl, and in India, baby sharks are considered a delicacy due to their undeveloped flesh. Shark fins are a large part of the commercial shark fishing market, considered a delicacy in many parts of Asia. Although when fished commercial, the hope is that the finned shark is retained for its meat and various other purposes, in many cases sharks are finned and dumped back into the ocean alive, with the now immobile shark quickly succumbing to predators or suffocation. Sharks are also caught, and often kept, as bycatch when fishing for other large species of fish. Commercial fishing limits the ability of shark populations to repopulate as many are harvested before they reach sexual maturity and have had a chance to reproduce. 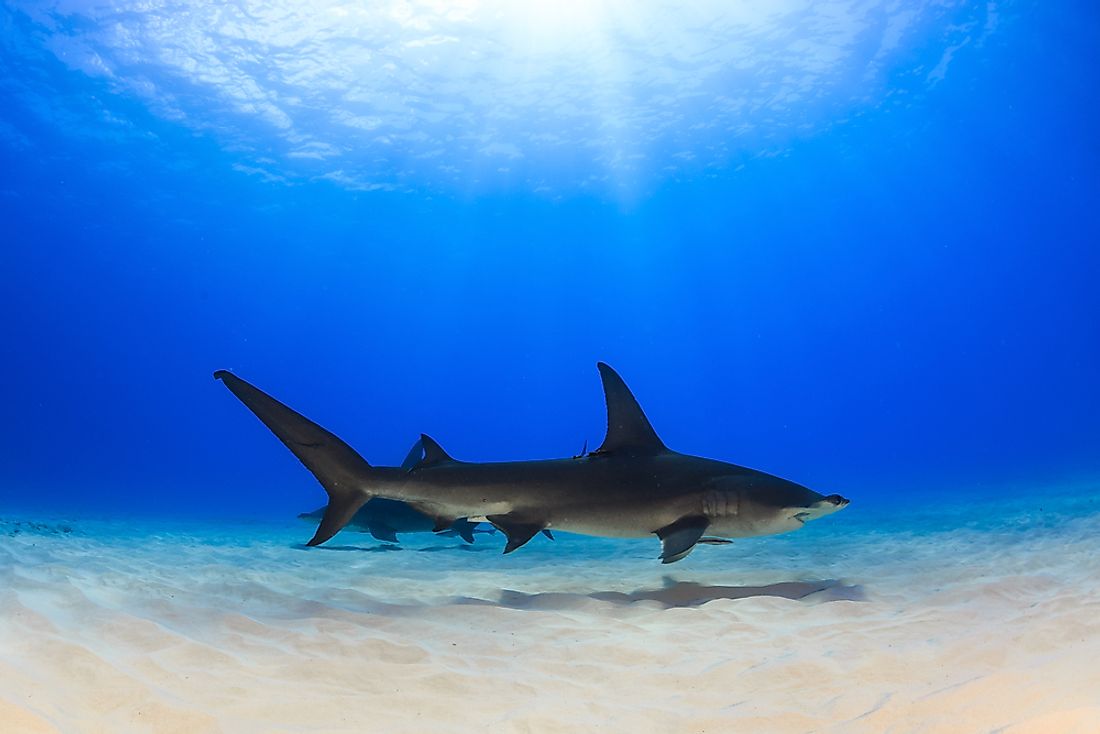 Two Great Hammerhead sharks off the coast of the Bahamas. The Great Hammerhead, listed as Endangered by the IUCN, is heavily fished as its large fins are of great value in the seafood market. Photo credit: shutterstock.com.

World Atlas recently had a chance to speak to Meaghan Brosnan, the Marine Program Director at WILDAID about the importance of shark sanctuaries and their role in shark conservation.

“Shark sanctuaries, and marine reserves in general, are important for protecting key species,” explained Brosnan. “As apex predators, sharks play a crucial role in maintaining marine biodiversity. The ocean ecosystem is made up of very intricate food webs. Sharks are at the top of these webs and are considered by scientists to be ‘keystone’ species, meaning that removing them causes the whole structure to collapse. For this reason, the prospect of a food chain minus its apex predators may mean the end for many more species. A number of scientific studies demonstrate that depletion of sharks results in the loss of commercially important fish and shellfish species down the food chain, including key fisheries such as tuna.”

Sharks are also important for another reason, disclosed Brosnan: “Sharks are important for local ecosystems, but also for eco-tourism (including diving), which may help to fund other marine conservation initiatives. For example, a new study by National Geographic Society and UC Santa Barbara found that each shark in the Galápagos is worth about $5.4 million over its lifetime. A dead shark, in contrast, only fetches about $200 for the fishermen. Marine-based tourism supports more than a third of all jobs in the Galápagos Islands, bringing in $178 million per year. By contrast, in places where sharks have been fished out of existence, marine ecosystems may collapse.”

Shark sanctuaries and conservation organizations also play an important role in reshaping how communities look at sharks, continued Brosnan, explaining that “Shark sanctuaries help dispel the notion of sharks as aggressive species by fostering community and governmental support, as well as spreading awareness about the benefits of sharks to local ecosystems. WildAid ensures the success of shark sanctuaries and generates mass support for sharks and other threatened species by providing comprehensive protection for sharks and other marine species in the places we work. Our mission is to end illegal wildlife poaching and do this by targeting both the supply and the demand. From the demand side, we conduct mass celebrity-led awareness campaigns in countries such as China, Vietnam, and Thailand to reduce demand for products such as shark fin soup and dispel inaccurate popular perceptions of sharks. On the supply side, we provide comprehensive protection for marine protected areas, shark sanctuaries, and fisheries. This includes strengthening management and enforcement to ensure that park rangers can stop illegal shark fishing and punish infractors, working with local communities to teach them about the importance of sharks and other species protected by conservation initiatives and how it benefits them, and providing support for unique marine conservation projects around the world through our Nexus Blue initiative.”

Shark sanctuaries are making great strides in the protection of the world’s sharks. Several countries have also put into place shark conservation rules of their own such as shark finning bans by Taiwan and the US on all their vessels, and the declaration of the great white shark as a protected species by South Africa. However, more needs to be done to ensure the survival and repopulation of threatened shark species.

What Else Can Be Done?

When asked what more needs to be done in regards to shark conservation, Brosnan answered: “We need to continue generating support amongst governments and local communities for shark conservation initiatives, such as shark sanctuaries and marine reserves, ensure adequate enforcement of these areas, and counteract negative shark publicity with positive publicity through greater community outreach and mass awareness campaigns.”

Shark conservation doesn’t rest solely in government hands; the general public has a role to play as well. Individuals can “educate their friends and family about the importance of sharks or refer them to WildAid’s website, Nexus Blue, or social media channels (Facebook, Twitter and Instagram) to learn more about sharks,” says Brosnan. “They can also say no to shark fin soup, avoid buying goods made out of shark products (such as cosmetics with squalene or shark liver oil), and support shark sanctuaries and marine protected areas that prohibit fishing (which also account for numerous shark deaths as bycatch) and the protection of places that act as shark aggregation or mating zones, such as the Galapagos, Palau, Raja Ampat in Indonesia, and California’s MPAs.”

In the end, shark conservation comes down to a mix of government initiatives and personal choices. Brosnan stressed the importance of popular support for shark conservation, saying that: “Protecting sharks worldwide requires mass public awareness of the importance of sharks to their ecosystems and funding for conservation initiatives. Knowledge is power, and you can learn more about WildAid’s marine protection and shark conservation work by subscribing to WildAid’s marine newsletter. Popular support is crucial to ensure the success of shark sanctuaries and marine reserves. You can learn more about WildAid projects in the Galapagos, Palau, and Indonesia on Nexus Blue’s projects page.”

Kelly Bergevin is a writer and editor based in Montreal, Canada. She is an avid learner and has recently turned her focus towards environmental issues and wildlife conservation efforts.