The O. malviae sp., which measures between only 1 or 1.2 cm, is considered to be the smallest terrestrial fern on the planet.

Mr. Mitesh Patel and Dr. MN Reddy, two researchers from Gujarat, India, have discovered the world’s smallest terrestrial fern. The discovery was made in the Western Ghats region of India, which is one of the world's major biodiversity hotspots. The study was recently published in “Scientific Reports”, an online international multidisciplinary research journal from the publishers of Nature.

The petit plant was discovered during a botanical expedition in the Ahwa forests of the Western Ghats region in Gujarat’s Dang District. World Atlas managed to catch up with one of the researchers involved in the discovery of the plant, Mr. Mitesh Patel. Mr. Patel is currently working at the Bapalal Vaidya Botanical Research Centre of the Veer Narmad South Gujarat University in Surat. Speaking of the surprising discovery of the plant, he said the following:

“Every monsoon season, I collect Pteridophytes from different regions of Gujarat as part of my research project. During such a field trip in 2016, I stumbled upon a population of an unusually small sized fern plant.”

Initial observations by Mr. Patel and his colleagues concluded that the fern belonged to the Ophioglossum genus that includes a group of ferns commonly known as the “adder’s tongue ferns”. The name comes from the spore-bearing stalks of these plants that are thought to resemble the tongue of a snake.

However, the newly discovered plant’s small size and several other characters distinguished it from all other known species of the genus. Speculating the possible discovery of a new species, the researchers collected specimens of this plant and carried them to their laboratory for subsequent detailed analysis. 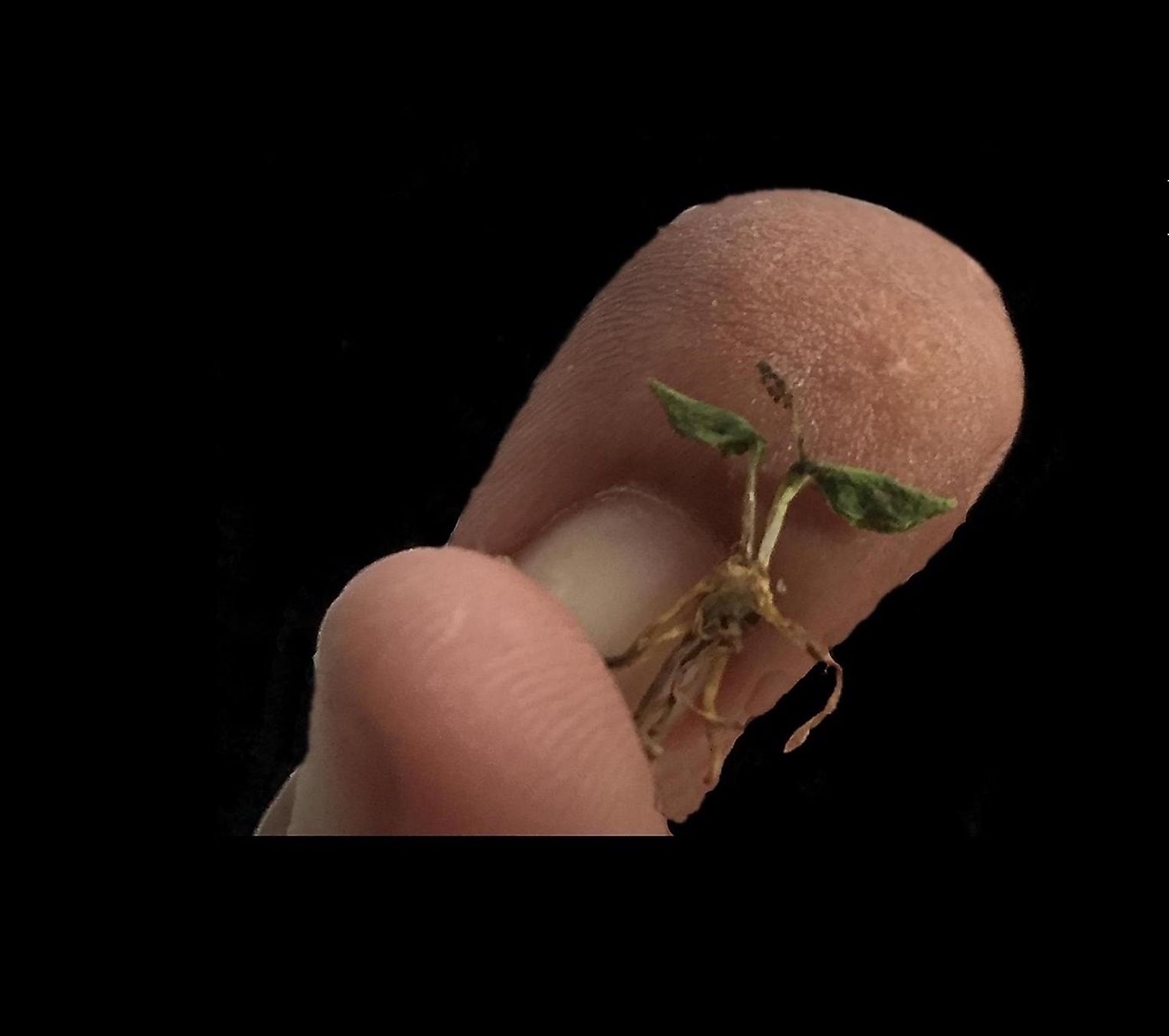 The size of the O. malviae sp. compared to a fingernail. Please credit: Mitesh Patel and Mandadi Narsimha Reddy.

The most incredible feature of the newly discovered plant was its size that was comparable to that of a fingernail! The size of the fern was found to vary between 1 to 1.2 cm. Only an aquatic fern species, the Azolla caroliniana with an average size of 0.5 to 1.5 cm, gives tough competition to this fern. Mr. Patel said that it is possible that the small size of the fern had hindered its discovery all along.

"The newly discovered fern is unique among species of the Ophioglossum genus by its very small size and spike, spores with outer perine layer and unique type of stomata in which the marginal cells of lower epidermis form dome like papillae,” summarized Mr. Patel.

The researchers concluded that the newly discovered plant was a new species and the world’s smallest terrestrial pteridophyte. It was named Ophioglossum malviae after Malvi Surti, a lady who inspired Mr. Patel to pursue his research in the field during his early career days.

Is The New Species In Danger?

According to Mr. Patel, initial observations suggest that the Ophioglossum malviae is a seasonal species that grows with the first rains of the monsoon season. It lives only for a few months following which new plants are born through its spores the next year.

The fact that the fern species was only recently discovered, and that the scientists were able to uncover only 12 of these plants in the Ahwa forest division, could possibly point towards the rare occurrence of the species.

“Currently, very few individuals of this species have been collected by us from the type locality. However, this area is poorly explored for its Pteridophyte diversity. Therefore, we can assume that the Ophioglossum malviae might also be distributed at other areas in the region. In the coming season, we intend to explore this possibility.”

Mr. Patel is also concerned about the future of the world’s smallest land fern.

He said, “Since the type locality of the plant is utilized by the local tribal people as a grazing ground for their livestock, the survival of the world’s smallest land fern might be at stake.”