The demoiselle crane, a bird named for its elegant appearance, was facing hurdles and population decline in the Indian town it migrates to. That is, until the efforts of Sevaram Mali Parihar and fellow locals turned things around.

“Atithi Devo Bhava” is an ancient phrase that translates to “the guest is akin to God” in English. It is an elemental belief in India. In fact, for ages, treating guests with the highest honor, warmth, and care has been an integral part of Indian culture. Many tales and legends in India mention the immense sacrifices made by the people to ensure that their guests do not leave unhappy or unfed. Often, this treatment has been extended to include even non-human guests like animals and birds. Today still, a majority of Indians adhere to this belief including the village folk of Khichan in the Phalodi tehsil of Jodhpur district in the Indian state of Rajasthan.


World Atlas had the privilege of speaking to Mr. Sevaram Mali Parihar from Khichan at the venue of the International Wildlife Film Show, 2018, organized by Anubhab in Kolkata, India. Mr. Mali can be best described as a “conservation warrior”. He is most well-known as the protector of the demoiselle cranes that arrive in India from Mongolia and other parts of Eurasia every year for wintering. This article is a tale of how a single individual can bring about a big change and save the lives of thousands.

The demoiselle crane (Grus virgo) is a crane species that was named after the French word for damsel by none other than Marie Antoinette, the famous last queen of France. However, it was not just the French queen who was mesmerized by these birds. Their long and slender figures and graceful gait also inspired poets and writers for centuries on the other side of the world in northern India, to write about them. In some parts of the Indian subcontinent, the birds are called by the local name of Koonj, a name which is often also applied to beautiful women living in the region.

Despite their delicate appearance, however, the demoiselle cranes are known to fight all odds to make one of the harshest migrations in the world. The range of this species stretches from the Black Sea to Northeastern China and Mongolia. Turkey also hosts a small breeding population of the species. Every year, the birds migrate to Africa and the Indian subcontinent to spend their winter in the warm environs of these regions. Therefore, in India, the term koonj is also used to denote people who have left their home to travel to the unknown or those who have undertaken a challenging journey.

Among several places in India where these damsels of the sky come down to earth is the sleepy little village of Khichan. The village, with only a few inhabitants, is located in the middle of the Thar Desert. Every year during the month of August, the quiet village gets transformed with the arrival of the unique feathered visitors, the demoiselle cranes, from their breeding grounds in Eurasia. From then on, and until they are ready to fly back to their breeding sites in about March, the villagers become the guardians of these birds. Although a few years back only about 1,500 birds would arrive at Khichan, the number of birds have soared to over 20,000 in recent times and the entire credit goes to the villagers who have over the years treated the birds with the utmost level of love and warmth.

Of special mention are villagers like Ratanlal Maloo and Sevaram Mali, who have gone an extra length to ensure that these foreign visitors have a safe stay at the village before they are ready to fly back to their breeding grounds thousands of miles away. Maloo was the first person to start feeding large groups of the demoiselle cranes in Khichan. His efforts started attracting more and more birds to the village each year. It wasn’t long before he realized that the birds were in danger of being attacked by feral dogs in the area. With the help of other villagers, he constructed a massive fenced enclosure called the “chugga ghar” or the “feeding home”. He also supervised the construction of a granary where the grains to feed the birds were to be stored. Gradually, spaces were also allotted to house the injured cranes and nurse them back to health. The generosity of the Jain community living in the area helped ensure that there was never a dearth of funds to feed every demoiselle crane that visited Khichan. Although Ratan Lal passed away in 2011, the legacy set by him continues to inspire the people of Khichan and today, another leader has emerged in the tiny village who has achieved immense recognition for his efforts to save the birds. 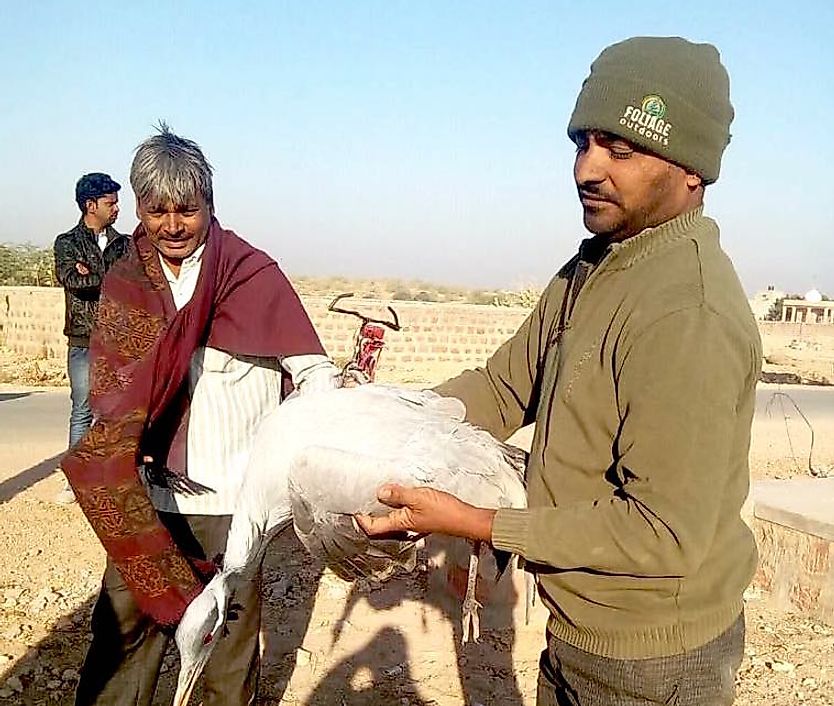 
The Story Of Sevaram Mali Parihar: Saving The Damsels In Distress

Although the generous villagers of Khichan continued to feed the birds after the demise of Ratan Lal, some major threats to the survival of these birds soon emerged. Many birds were dying due to electrocution after coming in contact with the high voltage electricity poles set up close to their feeding grounds. Pesticides used in crop fields were also a long-term threat to the demoiselle cranes. Sevaram Mali, a Khichan resident, decided to take measures to protect these birds. He fought with the local civic bodies and filed complaints at the state’s electricity board and high court to have the cables removed. In retaliation, a heavy fine was imposed against him.

Sevaram Mali exhibited great bravery and patience by ignoring the numerous threats that were aimed at him. Instead, he continued to fight on. Armed with the backing of the Rajasthan Forest Department, as well as with his determination to save the birds, he ultimately won his case. The high-tension electricity lines were removed and the birds were safe once again. Sevaram Mali also worked with the state electricity board to get all the electrical wires passing through Khichan properly insulated. He is also constantly striving to discourage the local farmers from using pesticides in the field. His work has been applauded widely and the results of his work are clearly visible in the increasing number of demoiselle cranes arriving in Khichan every year. World Atlas interviewed this amazing personality. Here are some excerpts from his interview:

WA: Who or what first inspired you to engage in wildlife conservation activities?

When I was small, I used to watch my mother feed rotis to the cows and serve water to the dogs early in the morning every day. It is from her that I learned to be kind to all living creatures. When I was studying in standard seven, I saw my mother nurse a pigeon back to health. The bird was brought to our home in a dehydrated condition on a hot summer day. My mother helped it survive by cooling its body with the help of water. I was so awed by this act of reviving a life that I soon dropped out of school to dedicate my entire time to save the birds and animals in our village.

WA: Who or what continues to inspire you now?

There is no limit to my desire to save wildlife now. Today, I myself strive to inspire and encourage others to conserve wildlife and help them learn to love the birds.

WA: What are the biggest threats to the demoiselle cranes in Khichan?

The biggest threat to these birds was the chance of getting electrocuted due to the presence of high tension electricity wires near the area of their feeding. The consumption of grains treated with insecticides and pesticides is another massive threat to the well-being of these birds.

WA: What were the challenges you had to overcome to ensure the protection of the demoiselle cranes visiting Khichan?

I have faced numerous hurdles in my attempts to protect the birds. However, I have decided that as long as I am alive, I will strive to care for the birds. I do not want to look back. I know that if I do so, I will have to stop doing what I do. I always try to remain positive. I am not afraid of anyone. I take the help of the judicial system of my country to fight for my cause. And I win.

WA: What do you have planned for the future?

I have never really planned anything in the past 22 years. I never make any advance planning. As and when the problems arise, and I understand that there is a threat to the demoiselle cranes, I start to look for solutions to the problem.

Today, the people of the country have started recognizing Sevaram Mali’s work for the conservation of the demoiselle cranes. In recognition of his work, he has won several prestigious awards. On June 10th of this year, he was invited to Kolkata by the members of Anubhab, an organization dedicated to the restoration of nature and environmental imbalance and the betterment of the future of humankind. Here, he received the Green Warrior Award. 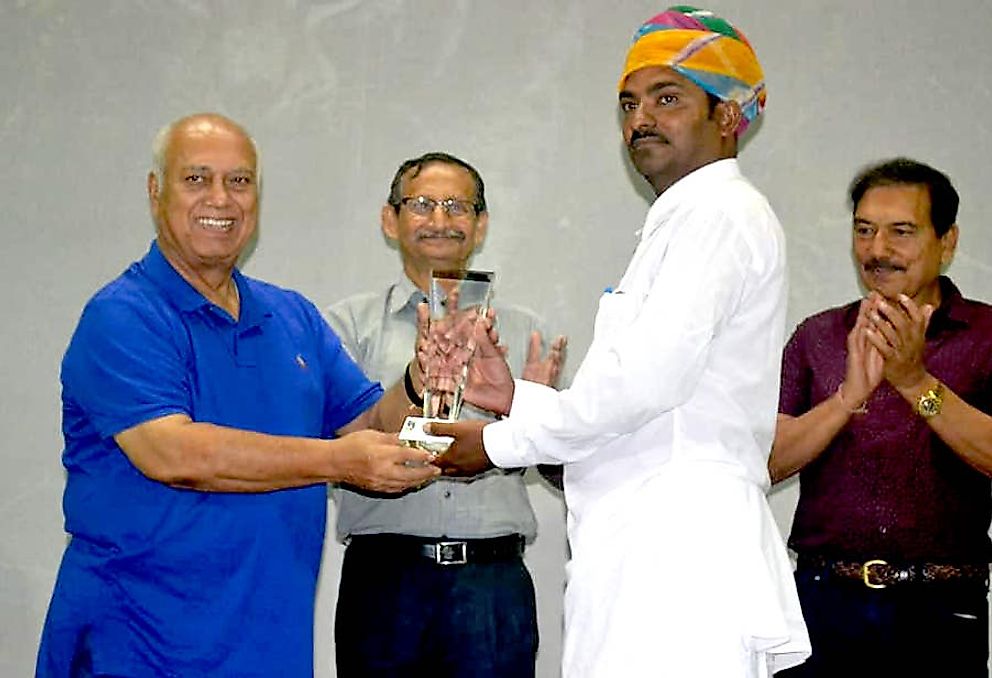 "To give away the Green Warrior Award, we were in the search of the real heroes who, despite societal, political, and economic pressures are working relentlessly for the cause of conservation. Sevaram Mali is one such individual whose work is helping conserve the local biodiversity of Khichan. He is an inspiration to all of us."

In the end, Sevaram Mali makes India proud by keeping alive the tradition of welcoming the guests with a warm heart and providing them a safe stay while they visit his tiny village in Rajasthan. He embodies the true meaning of “Antithi Devo Bhava."