The cheetah is one of the world’s most admired predators. However, it is also endangered. Learn how guard dogs are helping to protect cheetah populations.

The fastest mammal on land, the Cheetah, is racing to extinction. As per the IUCN, only 6,674 mature individuals of the species remain and the population is steadily decreasing. Hence, conservationists across the world are concerned about the future of the cheetah. Innovative solutions and urgent actions are needed to address the perilous decline in cheetah populations. It is here that organizations like the Cheetah Conservation Fund (CCF), Namibia, and Cheetah Outreach, South Africa, come into the scene. They are using livestock guarding dogs to save the free-ranging African cheetahs from the farmers’ wrath.

Cheetahs Are In Serious Trouble

The cheetah is one of the world’s most admired predators. Its beauty, grace, and speed are much appreciated. Despite this, the cheetah ceases to exist today in 91% of its historic range. It has been almost completely driven out of Asia. In Africa, its population has been predominantly confined to only six countries.

Unsurprisingly, humans are the primary reason why the cheetah, an animal that is capable of surviving in a wide variety of habitats, is threatened with extinction.

The cheetah faces habitat loss as wilderness areas once inhabited by it has been converted into agricultural or grazing lands. Farmers also kill cheetahs to protect their livestock. However, cheetahs are seldom known to attack livestock. Vehicle collisions also kill many of these animals. Adding to the threats is poaching of the cheetahs for their skin and other body parts. In some areas of Africa, cheetahs are even killed for bushmeat. Another threat to this species is the illegal trade of cheetah cubs to meet the whims of some residents of the Middle East who like to keep cheetahs as pets.

It is not only the direct killing of cheetahs that is decimating the cheetah populations. A reduction in the prey populations of the cheetah due to habitat loss, poaching, and other threats also indirectly threaten the survival of the cheetah.

Dogs To The Rescue 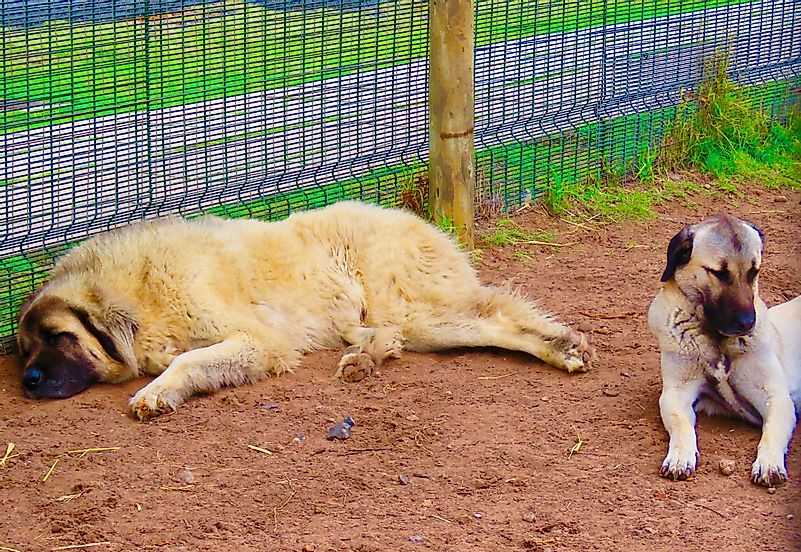 Anatolian shepherd dogs are bred at Cheetah Outreach to supply farmers with the dogs to guard their livestock. Photo credit: Arijit Nag.

Dogs may be man’s best friends, but unknown to the cheetah, the dogs are also their saviors.

Historically, one of the biggest threats to the cheetahs has come from ranchers raising livestock. Cheetahs that stray outside of the protected areas into farmlands become an immediate concern for the ranchers for whom their livestock is their primary source of income. It is here that they take up guns to protect their livestock from cheetah attacks.

To give farmers their peace of mind and protect the cheetahs at the same time, CCF and Cheetah Outreach are busy persuading ranch owners to save their livestock by adopting livestock guard dogs.

Anatolian Shepherd and Kangla have been used for this purpose. The dogs are trained since infancy to protect livestock. Farmers raise the dogs exclusively with their flock or herd. The dogs develop a sense of ownership of the flock and instinctively protects the livestock from all kinds of predators.

These dog breeds also have a history of protecting livestock from wolves, bears, and other predators for over 5,000 years. The large size of these dogs, their loud barking, and their strong protective nature are bound to keep the cheetahs at bay. With the dogs acting as a buffer between humans and the cheetahs, the conflict between the ranch owners and the cheetahs have considerably reduced.

A Success With Far Reaching Consequences

Both CCF and Cheetah Outreach claim to have attained a great degree of success in their respective Livestock Guarding Dog Programs. By the end of 2018, Cheetah Outreach had managed to place over 300 of these dogs on South African farms in Limpopo and North West Provinces which lie in cheetah range. In other provinces, these dogs have been used to protect livestock from other predators like caracals and black-backed jackals which are also persecuted by farmers for attacking their livestock. These dogs have helped reduce livestock losses and protected over 425,000 hectares of land from predator attacks in South Africa.

A similar program, the Mongolian Bankhar Dog Project, is helping save the lives of snow leopards in another part of the world in Mongolia, Asia. Bankhar is a unique livestock protection dog that is native to the steppes of Mongolia. These dogs are bred, trained, and places with herder host families as part of the project. They protect the livestock against predators like Mongolian snow leopard acting as a mediator between endangered predator species and the Mongolian herders.

With the dogs helping attain a certain degree of success in cheetah conservation in Namibia, South Africa, and Mongolia, it will be now interesting to see whether livestock guarding dogs in other parts of the world can save predators from death at the hands of farmers and ranch owners.

For example, leopards in India are a source of great disturbance for the farmers who complain of their cattle being killed by these predators. Could dogs be the answer to their problem and come to the rescue of the Indian leopards? Only time will tell.