In Papua New Guniea, adorning headdresses with bird feathers is a growing trend. Thousands of birds are killed to serve the purpose.

In Papua New Guinea (PNG), the Pesquet's parrot is in grave jeopardy. A vulnerable species on the IUCN Red List, the bird continues to be brutally trapped and hunted for its brilliant red plumage that serves to adorn the ceremonial headdresses and outfits (bilas) of the highlanders of the country. Worse still, the trend is growing as the younger generations are donning bilas more than ever.

A recent study by a team of researchers from Wildlife Conservation Society-PNG unveils some frightful facts.

The dead Pesquet’s parrots present in bilas far outnumber those present in the wild.

As the feathers in bilas degrade over time, the need to hunt more birds arise.

Three Pesquet's parrots must be killed to generate enough feathers to make just a single headdress.

A survey also exhibited that approximately 3,200 parrots or 8% of the Pesquet's surviving population are hunted annually to supply bilas materials to just a single district in PNG's Chimbu province. 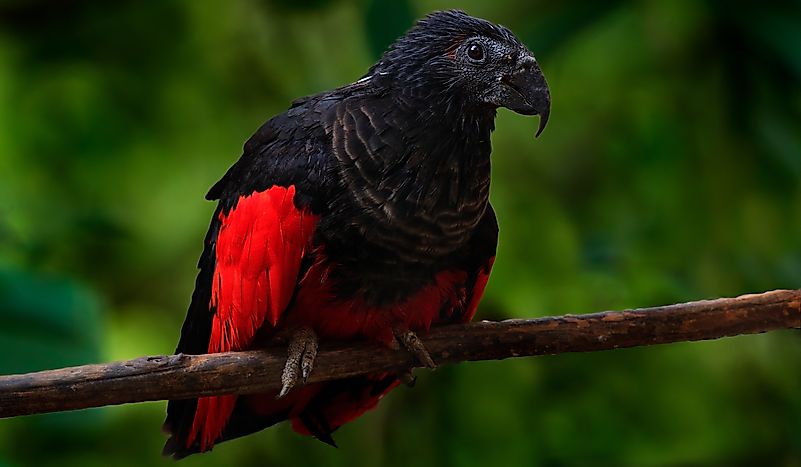 Reducing Demand To Conserve The Parrot

Thus, given the dire condition of the species, the researchers from WCS-PNG led by Grace Nugi are busy conserving the Pesquet’s parrot, but not in a conventional way.

“Site-based conservation of these parrots just isn’t that feasible. The cost and logistics of operating in such remote areas (lowland forest habitats of the Pesquet's parrot) of PNG would be prohibitive,” said Nugi.

“The most practical and realistic way to start is for people to preserve the headdresses they already have,” she said.

So, Nugi and her colleagues devised an innovative solution- preserving the dead parrots to save the live ones by distributing and popularizing Bilas Protection Kits.

Traditionally, bilas is worn on special occasions once or twice a year. The rest of the time, the bilas are deconstructed and the feathers are stored in bamboo in rafters of the owner's home. This old method of protection is, however, not foolproof. Although fire from the family hearth does keep mold away, rodents and insects find a way to destroy the precious feathers over time. By providing a sound plastic encasing with mothballs, the researchers aim to increase the longevity of the feathers and, in turn, reduce the need for fresh bird kills.

Convincing the people to use the Bilas Protection Kits is pretty easy. The feathers do not come for free. A hefty cost is associated with them. Since demand for them is primarily high among the highland tribes of PNG and the birds live in lowland forests, the feathers are bought from traders who serve as middlemen between trappers and buyers. In a country where 38% of the population live in abject poverty, buying feathers for 90 Kina or around $34 burns a hole in the pockets of the buyers. So, for them, preserving their precious feathers becomes a top priority.

A Future For The Pesquet’s Parrots: Bright Or Bleak?

By diminishing the demand, it appears that there is a possibility of eliminating the root cause of the Pesquet's parrot's disappearance. Well-preserved feathers can last 15 to 20 years. But there are still several challenges.

First, distributing Bilas Protection Kits to the 720,000-strong population of bilas users in PNG's Jiawaka and Chimbu provinces is both costly and labor-intensive.

With a 2% annual growth rate of the country's population, the bilas culture could potentially double in the next 35 years.

What is even more alarming is that with the increasing prosperity of the nation, recognition of its unique culture, and an upsurge in the number of cultural shows, Papua New Guineans are now donning bilas more than ever before. Younger generations are even wearing them on their graduation ceremonies.

Thus, the future might demand additional strategies to protect the Pesquet's parrots like the use of alternatives to real or wild bird feathers.