The koala, also known as the koala bear, is a marsupial native to Australia. It is found in South Australia, Victoria, New South Wales, and Queensland. The koala is distinguished by its large head with fluffy ears, spoon-shaped nose, and tailless body. It is sometimes known as the koala bear because it resembles a bear though it is a marsupial. Koalas inhabit eucalyptus woodlands since the leaves of the trees make up the largest part of their diet. Eucalyptus trees have limited calories and nutritional content, so the koalas sleep for up to 20 hours a day to conserve energy and fat. Koalas are asocial animals, but mothers can be seen moving around with their dependent offspring. They have limited predators and parasites, but their greatest threats are pathogens, (including the koala retrovirus and Chlamydiaceae), droughts, and wildfires. The marsupials have been part of Australian history for thousands of years; indigenous Australians hunted them for fur as depicted in cave art and myths. The koala is used as a symbol of Australia alongside the kangaroo because of its distinctive appearance and a limited geographic range. They were hunted in the 20th century for fur, while large-scale cullings in Queensland prompted a public outcry to protect and conserve the species which has been listed as vulnerable as habitat destruction and urbanization continue to diminish its natural habitat.

The Ecological Role Of Koalas

The largest ecological role of the koalas is felt in the eucalypt forests, where they spend most of their time. The koala population in Australia is estimated at 80,000, but before the arrival of the aboriginal people, their population ranged into millions. Such a large population would have a significant impact on the canopy density and the amount of light reaching the forest floor. Koalas consume the excess vegetation, therefore, reduce the biomass that fuels frequent and intense fires. During the rainy season, koala droppings act as nutrients for the regeneration of undergrowth, ensuring that the forests regenerate to sustain future life. These excrements also serve as food for insects and small rodents. Koalas are not the only species that feed on eucalyptus, other animals and insects compete for the same source of food, but some are unable to climb higher to feed on the leaves. As the koalas feed, they break branches and drop leaves, making them available to ground insects.Before humans arrived in Australia, the natural predators of the koalas were large carnivores, including the marsupial lions, giant goanna, and giant pythons. The Tasmanian devil and the Thylacine that inhabited mainland Australia 3,000 years ago also had koalas on their menu. The introduction of the dingo to mainland Australia 3,500 years ago brought in a new predator that was unmatched by the native carnivores. The dingo hunted the koalas forcing the marsupial to seek protection in trees. Raptors and owls also prey on the marsupials. When koalas die, their remains become a source of food for insects and bacteria. 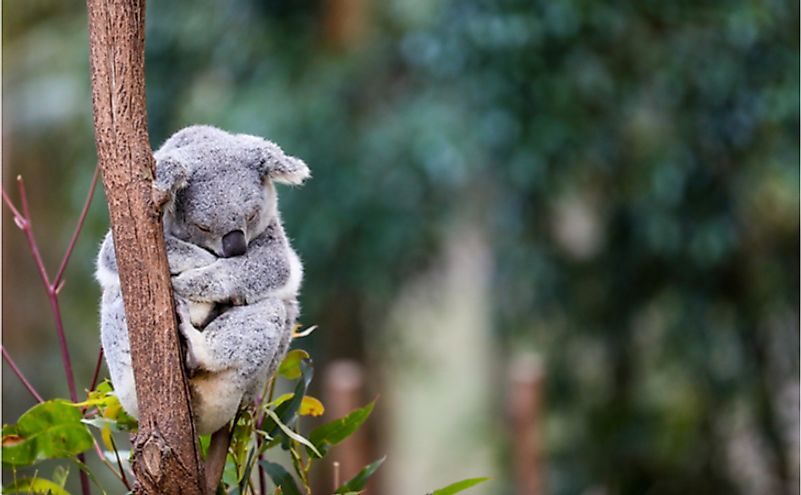 Trees play a crucial role in the water cycle; they suck up water from the underground and release it to the atmosphere, which then drops as rainfall. Deforestation and land clearing stop the formation of clouds resulting in diminished rainfall. After an extended period, desertification encroaches, and the land becomes unproductive and unable to support life. Koala forests aid in combating climate change by absorbing carbon dioxide from the atmosphere and converting it into organic carbon. As long as the trees do not burn or decompose, the carbon cannot be released into the atmosphere. The eucalyptus trees that grow in koala forests are among the most efficient in producing clean oxygen and storing carbon

Why Not Plant More Trees?

Changes in government policies in New South Wales and Queensland have weakened conservation laws leaving forests at the mercy of ranchers, lumberers, and farmers. Between 2013 and 2018, more than 150,000 hectares of koala habitat was lost in Queensland and New South Wales. The damage caused by deforestation is so immense that planting 20 million trees would not recover the environment. Small trees store less carbon, and it will take between 20 to 100 years for the seedlings to mature. Planted forests are not as diverse as natural forests and may not support a wide variety of animals. Protecting koala habitats also protect insects, mammals, birds, reptiles, and birds.

The Koala forests of Australia are a critical part of the global carbon stores that should be protected. About 80% of forests in the world have been cleared, fragmented or degraded. The universal compensation scheme is addressing the need to compensate forests in developing countries but has ignored the developed world. In 2019 thousands of acres of forest, including koala habitat, were destroyed by forest fires killing hundreds of animals and releasing millions of tons of carbon dioxide into the atmosphere. Deforestation and habitat degradation are listed as reasons for the frequent and intense fires.

The future of the koala habitats in Australia is not promising, considering the current trends. Global warming will likely increase the frequency and intensity of forest fires, while deforestation and human population pressure will push the animals out of their natural habitats. This will lead to the collapse of the ecosystem that has been shaped by thousands of years of interdependence. If no effort is made to secure the future of the koalas, they are likely to be extinct in the next 100 years.

This page was last updated on December 2, 2019.
By Victor Kiprop