Qatar is a Western Asian country on the Arabian Peninsula bordering Saudi Arabia and the Persian Gulf. In the 21st century, the country emerged as a significant influencer in the Arab World and leading power in the region. Learn about some interesting facts associated with Qatar in this article.

The Al Jazeera Media Network Is Funded By Qatar

AJMN is a global media conglomerate that is funded by the state of Qatar. It acts as the parent company of Al Jazeera. It is headquartered in Doha, the capital of Qatar. Globally, AJMN has the second-largest bureaux after BBC. Al Jazeera was initially launched as the Al Jazeera Satellite on November 1, 1996, and since then experienced rapid growth and expansion into what it is today. 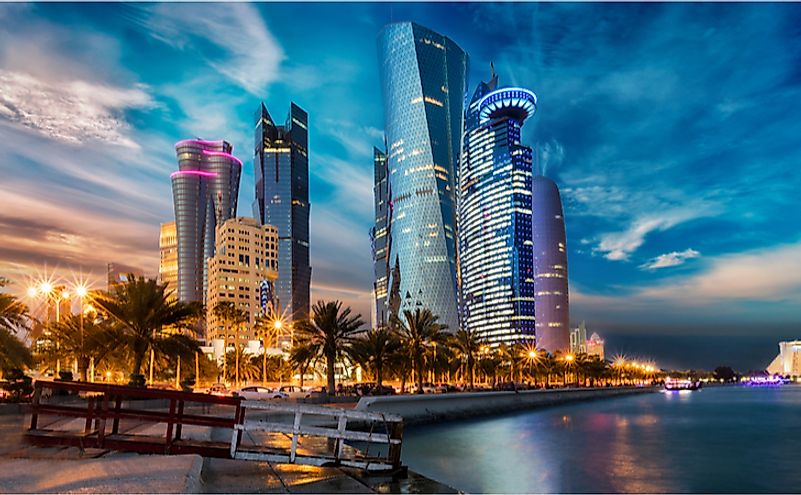 According to CIA World Factbook, Qatar had a GDP per capita of $124,500 in 2017, ranking the country as the second richest in the world after Liechtenstein in Europe. Qatar had an unemployment rate of only 0.1% in 2013. No Qatari citizen lives below the poverty line. According to the corporate law in the country, any business venture opened in Qatar must have a Qatari national holding 51% of the venture.

Oil Runs The Economy Of Qatar

With proven oil reserves of 15 billion barrels and gas fields, Qatar holds 13% of the world's reserve of these energy resources. Thus, the country is extremely well equipped with oil resources to sustain its economy for years. Since oil is the backbone of Qatar's economy, fluctuating oil prices also affect the economy significantly. For example, between 1982 and 1989, the economy faced a downturn due to a drop in oil prices and the imposition of OPEC quotas on crude oil production. Currently, however, the government of Qatar aims to diversify the economy to decrease the heavy reliance on oil.

Qatar Has No Forests

Qatar has no natural forest cover. The arid climate of the country does not support the growth of dense tree cover. Only a limited number of plant species grow here, primarily desert scrub. Acacia is the most common species growing here and small patches of mangroves are found in the northern third of the country.

For centuries, pearl hunting was one of the primary sources of income for people in the region. It was popular as far back as 224 AD during the rule of the Sasanian Empire. However, when Japan introduced cultured pearl onto the world market in the 1920s and 1930s, the pearl industry of Qatar suffered a severe blow. The discovery of oil in Qatar in 1940 came to the rescue and helped the economy recover and thrive.

Qatar Per Capita CO2 Contribution Is Highest In The World

According to the World Bank data of 2014, the per capita CO2 emissions in Qatar is 43.9 metric tons per capita. It is the highest in the world. Thus, Qatari citizens have one of the highest carbon footprints in the world that contribute to global warming and climate change. 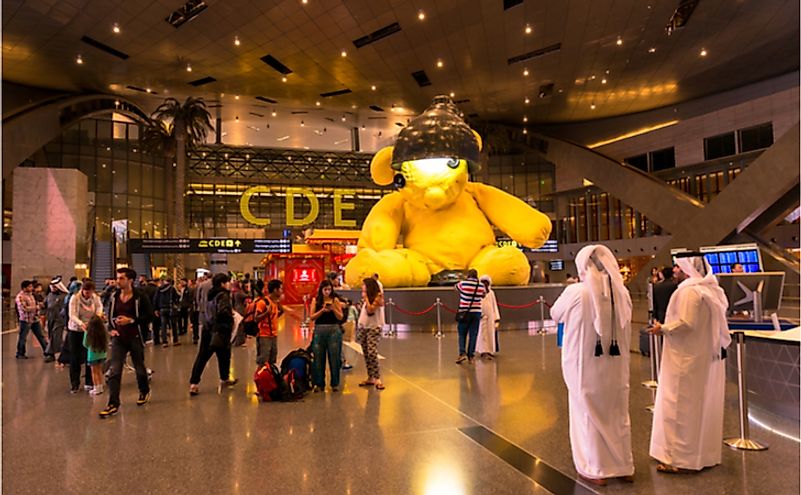 A giant canary yellow teddy bear sits inside a lamp in Qatar's Hamad International Airport. It is called the Lamp Bear and was designed by Urs Fischer, a Swiss artist. The bronze sculpture serves as a reminder of one's childhood and precious objects from home.

Doha Houses Most Of The Nation

With a population of about 1.8 million, Doha is Qatar's most populous city. Doha and its suburbs are home to over 80% of the country's total population. Doha is located on the Persian Gulf in eastern Qatar. It was established in the 1820s and made the national capital in 1971 following the country's independence from the British. Today, Doha is regarded as a beta-level global city. 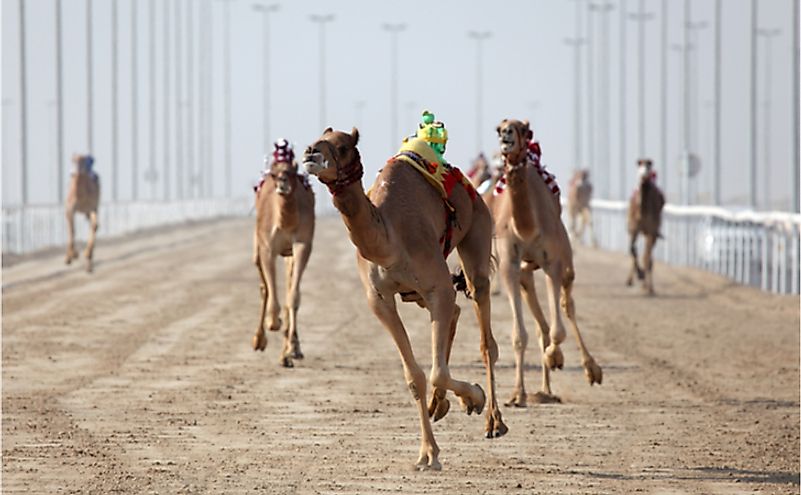 Camel racing is one of the most popular sports in the Arab countries and has been traditionally practiced for centuries. In the past, children were used as camel jockeys to keep the weight to a minimum. However, the practice was highly criticized by the UN and internationally as it put children at risk of injuries and abuse. Today, the camel races do not involve children but robot jockeys. These robots are placed atop the camel and control the animals as they run. They have special equipment built into them that allows the camel owner to remotely give instructions to the camel.

Qatar Is The World's Second Most Flattest Country

Located at the tip of the Arabian Peninsula, Qatar is a peninsula within a peninsula. Qatar is extremely flat with the highest point in the country located at an elevation of 203 m. The average elevation of Qatar is only 28 m. It is the world's second most flattest country.

This page was last updated on October 31, 2019.
By Oishimaya Sen Nag