Afghanistan is a county in Asia that occupies an area of 652,230 km2 and has an estimated population of 32,225,560. The landlocked nation is bordered by Pakistan, Iran, Turkmmenistan, Uzbekistan, Tajikistan, and China. It has spectacular landscapes, including mountains, deserts, forests, woodlands, and grasslands, that provide natural ecological habitats for a wide range of flora and fauna. Some of the animals that inhabit Afghanistan are discussed below.

The Marco Polo sheep, which is scientifically named Ovis ammon polii, is a species of mountain sheep that inhabits mountainous regions, steep valleys, gentle slopes, and highlands. The sheep's body is covered with brown wool on its upper side and white wool on its underside. Males have distinctive large spiral horns that can measure up to 140 cm, and begin to grow within 15 to 20 days after birth. Marco polo sheep are herbivores that feed on grass, leaves, and twigs of low plants. Females can give birth to one lamb following a gestation period of 160 days. The life span of a Marco polo sheep is about 13 years.

The Afghan hound is a species of ancient hunting dog that has a long, fine, silky coat that can be white, silver, brown, or black in color. It has a lean body and an elongated head with a black mask on its face. The Afghan hound was historically bred for hunting due to its speed, jumping capability, and large feet that are adapted to maneuver in both desert and mountainous terrains when persuing target animals. Females can give birth to between 6 and 8 puppies. The life span of an Afghan hound is approximately 14 years.

The mongoose species that inhabits Afghanistan is scientifically named Mungos mungo. It lives in burrows or in trees within various habitats such as grasslands, deserts, and tropical forests. The mongoose is a social animal that lives in groups called colonies. The species is an omnivore that feeds on small animals including birds, rodents, fish, insects, crabs, worms, and snakes. However, it may also supplement its diet with seeds, berries, eggs, and roots. Mongoose breeding usually occurs twice a year, and females have a gestation period of between 48 and 105 days, after which they give birth to between 1 and 4 pups. The mongoose has a life span of 11 years.

The common thick-tailed shrew is scientifically named Sorex araneus. Shrews are terrestrial mammals that closely resemble mice, but can be distinguished by their long, pointed snouts. The thick-tailed shrew prefers habitats that include sufficient ground cover to hide them from predators. However, some live in underground burrows, holes in trees, or in gardens. These animals are omnivores that can consume meals up to three times their mass due to a high metabolic rate. Their diet consists of small invertebrates and mammals together, as well as vegetables. Shrews are solitary animals that only come together during mating. Females have a short gestation period of 21 days, and can therefore reproduce up to three times a year. A female can give birth to between 2 and 10 young ones. The thick-tailed shrew has a life span of between only 1 and 2 years.

The desert hedgehog is a small mammal that is scientifically named Paraechinus aethiopicus. The animal usually inhabits desert terrain and dry steppes, are solitary, and are most active at night. The desert hedgehog enters hibernation during seasons with extreme temperatures and when food is scarce. The species is carnivorous, feeding on insects, snakes, scorpions, frogs, and birds. Mating normally occurs after hibernation, and females have a gestation period between 30 and 40 days, resulting in the birth of six hoglets. Young hoglets become independent at about 40 days old. Hedgehogs can live between 3 and 4 years in the wild, but up to 10 years in captivity. 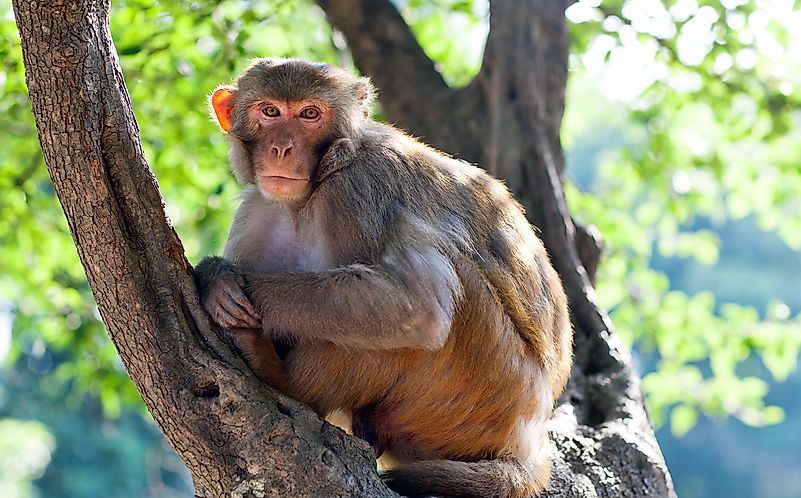 The rhesus monkey, which is scientifically named Macaca mulatta, is also known as the rhesus macaque. The rhesus monkey is a small Old World monkey that lacks fur and has a pink face. Its body has brown or gray skin, and it has a long tail for balancing on trees. The species is both a terrestrial and arboreal diurnal animal capable of living in diverse habitats such as forests, mountains, and wooded regions. Rhesus monkeys are herbivores, and their diet includes small twigs, fruits, roots, seeds, and cereals. Each breeding period lasts about 11 days, and females have a gestation period of 164 days. The rhesus monkey can live up to 30 years.

The gray wolf, which is scientifically named Canis lupus, is the most common wolf in Afghanistan. It has gray and brown fur, with a long bushy tail, a long snout, as well as pointed ears on the top of its head. The gray wolf inhabits forests, grasslands, mountains, arctic, and deserts. They live in social groups, called packs, and each pack is dominated by the strongest male and female pair, called alphas. Females give birth to approximately six young pups and raise them in underground dens. Gray wolves are carnivores that hunt in packs, and they can live for approximately 23 years in the wild. 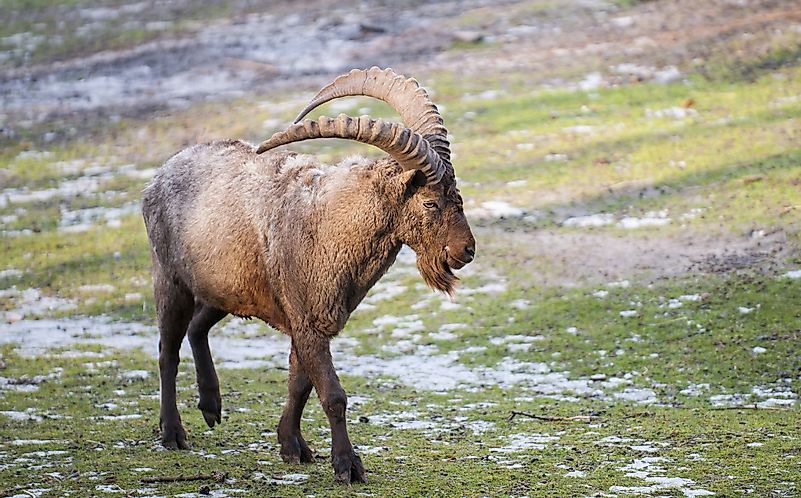 The Alpine ibex, which is scientifically named Capra ibex, is a species of wild goat. It has long curved horns, which the ibex uses to defend itself against predators. Males are larger than females, and have a distinctive beard on their chin. The species inhabits rocky terrains, highlands, and alpine forests, where they feed on grasses, flowers, and green plant vegetation. Alpine ibex are polygamous, meaning one male can mate with several females. Females have a gestation period of six months, after which they give birth to one kid.

A urial, which is scientifically named Ovis orientalis vignei, is a species of wild sheep. It lives in steep, grassy terrains and wooded mountainous areas, and is a diurnal animal that forages during the day. Its diet consists of a wide range of plants, grasses, and shrubs, as well as grains. Females give birth to one lamb after a gestation period of close to five months. Urials are under threat due to human encroachment on their habitat. The animal is also hunted for its horns, which are considered trophies.

The spotted hyena, which is scientifically named Crocuta crocuta, is a carnivoran mammal that has been nicknamed the "laughing hyena." Despite some characteristics and behaviors similar to dogs, the hyena is evolutionarily closer to cats and civets. The spotted hyena lives in woodlands, savanna, and grasslands. With perfect night vision, the spotted hyena typically hunts during the night. As omnivores, spotted hyenas hunt large mammals, but also scavenge for foods such as eggs and fruits. Hyenas are the only predators with jaws strong enough to tear an elephant hide, crush its bone, and digest it.

This page was last updated on December 24, 2019.
By Sharon Omondi