The wildlife in Ecuador is greatly influenced by the existence of the Ecuador Amazon and Galapagos Island as most of them inhabit these two ecological regions. Among these wild animals are those discussed below:

The Andean Fox is a wild animal in Ecuador that greatly resembles the red fox. This fox is scientifically known as Lycalopex culpaeus. Other names used to refer to the Andean Fox are Culpeo and Culpeo zorro.  The domesticated species of the Andean fox is referred to as Fuegian dog. The Andean fox is a species of wild dog widely found in South America. This animal has a white chin, grey and reddish fur, as well as reddish legs. Its diet constitutes animals such as rabbits, plant material, lizards, birds, and carrions. The gestation period of Andean foxes is approximately two months leading to the birth of between two and five pups. 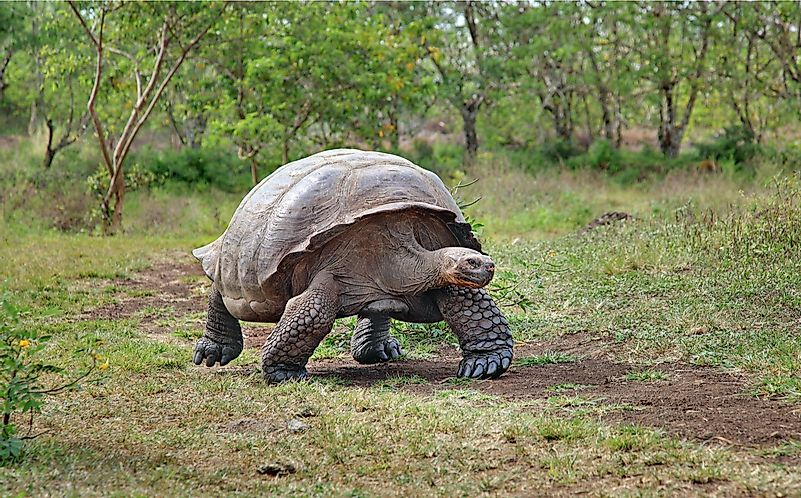 The Galapagos Tortoise is scientifically called Chelonoidis nigra. It weighs up to 470 pounds feeding on a diet comprising grass, cactus, and leaves as it is a herbivore. The Galapagos tortoise can survive for a whole year without taking any food or drink. The reason for this is that it possesses large internal water stores and a slow rate of metabolism. The tortoise is also characterized by sleeping for up to 16 hours daily. These animals are among those that live the longest on earth. The oldest Galapagos tortoise ever recorded was 152 years old when it died. Nonetheless, today these tortoises live for an average of 100 years in the wild. They are listed by the IUCN Red List as Vulnerable as they are threatened by human hunters, as well as invasive species.

The Ecuadorian Squirrel Monkey is an inquisitive animal that is known scientifically as Saimiri cassiquiarensis macrodon. It is found in eastern Ecuador, southern Colombia, and north and eastern Peru at elevations as high as 3,900 feet. The Ecuadorian squirrel monkey prefers dense forest habitats. This animals’ tail is 13-17 inches long. Females weigh 21 to 41 ounces while the males weigh 31.2 to 48.7 ounces resulting in the males being heavier than females. According to the IUCN Red List, the conservation status of the Ecuadorian squirrel monkey is of least concern. Humans keep these species of squirrel monkeys as pets. 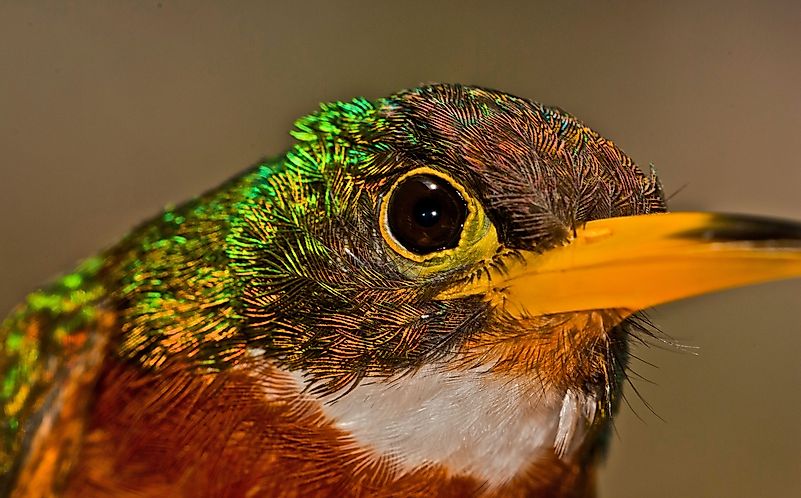 The Yellow-Billed Jacamars derive are birds that derive their names from the yellow beaks that they possess. Additionally, they bear turquoise feathers and yellow-black heads. Scientifically known as Galbula albirostris, the yellow-billed jacamars are relatively small in size and brightly colored. Its habitat is eastern Ecuador, as well as northwestern Brazil and southern Colombia. The bird mostly lives in tropical and subtropical moist lowland forests. Compared to other birds in Ecuador, yellow-billed jacamars are listed as of Least Concern by the IUCN Red List meaning that their populations are high.

There are two species of sloths that inhabit the forested regions of Ecuador namely the diurnal three-toed sloth and the nocturnal two-toed sloth. Sloths are closely related to ocelots, anteaters, and armadillos. They spend most of their lives hanging upside down the trees. Even activities such as eating, giving birth, and rearing young ones are carried out in that position. Sloths are herbivores that feed on shoots, fruits, and leaves. Like the Galapagos tortoises, they also have a slow metabolism rate meaning that they survive on small amounts of food. Sloths also have a weird digestive system whereby digestion of leaves takes several days and they defecate once a week. Sloths have a lifespan of 40 years.

Andean Spectacled Bears are endemic to the tropical Andes. They are popular for being the largest land carnivore in South America. It is also famed for being the last remaining short-faced bears in the world. Scientifically called Tremarctos ornatus, the Andean spectacled bear females are larger than the males. Its diet consists of small insects, grasses, vegetables, and meat. These bears are shy and solitary living up to 40 years in the wild.  Some of the threats to their existence are humans who hunt them for their fat, skin, and flesh; and also kill them when they destroy corn crops and kill domesticated animals like cattle. 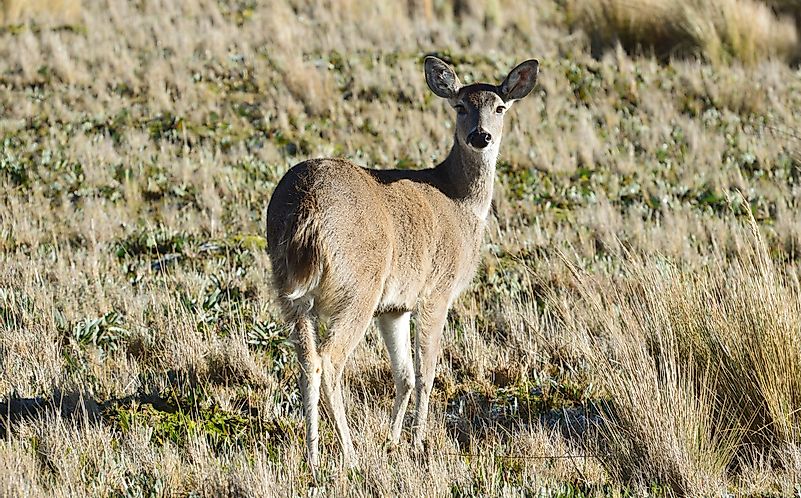 The white-tailed deer typically has a reddish-brown coat with the young ones having white spots on their fur. They live in a range of habitats including woodlands and farmlands. Scientifically known as Odocoileus virginianus, the white-tailed deer weigh 52 to 140 kilograms and grow up to 1.8 to 2.4 meters in length. They mature sexually at age of 1.5 years. Males often copulate with many females with the gestation period being between 6 to 7 months. The life span of the white-tailed deer is 6 to 14 years in captivity and 4 to 5 years in the wild. Some of the threats faced by these animals include diseases, automobile collisions, and hunting.

The pink river dolphins, scientifically known as Inia geoffrensis, are the largest species of river dolphins on earth. The locals call these dolphins “bufeo.” The pink river dolphins grow to 2.5 meters and weigh up to 352 pounds. They inhabit river systems and lakes; feeding on more than 50 different species of fish, crabs, freshwater turtles, and mollusks. Females give birth to a single calf after 11-12 months of gestation. Pink River Dolphins are threatened by pollution of the water systems, fishing with dynamite, and killings by humans. 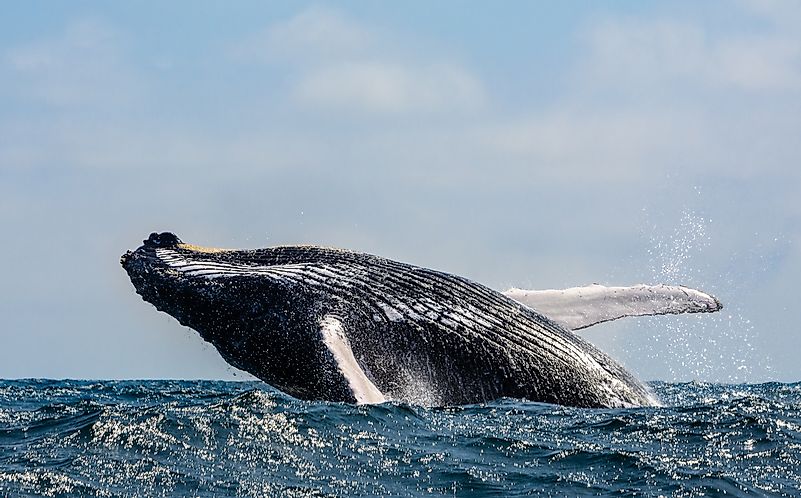 The humpback whales inhabit every ocean in the world. The origin of their name is the small hump in front of their dorsal fin. Humpback whales have a mass of 25-30 metric tons and a length of 12-16 meters. They have long pectoral fins, as well as knobbly heads. The humpback whales feed on planktons, small fish, and shrimp-like krill. They are popular for their magical songs that comprise of howls, cries, and moans that go for hours and travel through very long distances. These whales live for as long as 45-50 years with their greatest threat being collisions with ship and entanglement in fish gear.

The Ecuador poison frogs are diurnal animals that primarily live on forest floors. They are usually beautiful to behold because of their colored skin which possesses varied color mixes such as blue-yellow, green-black, orange-silver, and yellow-green. These frogs contain a highly poisonous venom known as batrachotoxin which results in paralysis and death when it enters the bloodstream. The Ecuadorian poison frogs are threatened by scientists hunting them for pharmaceutical purposes such as to manufacture pain killers.

This page was last updated on December 27, 2019.
By Sharon Omondi