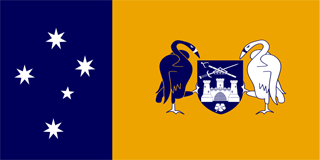 The Capital Territory flag was officially adopted in 1993.

The flag uses the Australian heraldic colors of blue and gold, and features the Southern Cross as five white stars at the hoist and the Canberra coat of arms in the fly.

The Capital Territory uses the coat of arms of Canberra that was created in 1927 by the Commonwealth Department of Home Affairs and Territories.

The coat of arms features a black swan and white swan supporting a blue shield. Within the shield a three-towered castle symbolizes the branches of government, the crossed sword and mace symbolize the Sword of State and Parliament of Australia respectively, and the crown symbolizes the Royal authority. An Imperial Crown and portcullis in front of a gum tree make up the crest of the arms, and the motto 'For the Queen, the Law, and the People' is displayed on a ribbon below.