Hampton Roads is the name given a body of water and the surrounding land areas in southeastern Virginia, USA.

Its deep, year-round harbor is heavily utilized by all branches of the America's military, especially the U.S. Navy. In addition, the waterfront areas are replete with commercial shipyards of all description, and miles of waterfront property.

Hampton Roads is one of the world's biggest natural harbors. Here the Elizabeth, James and Nansemond Rivers, and several smaller rivers empty into the Chesapeake Bay near that body of water's entrance into the Atlantic Ocean.

The overall area is covered with historical sites from America's Civil War, as well as from colonial times and the Revolutionary War. In addition, many of Virginia's most interesting cities and dozens of family attractions draw visitors from around the world throughout the year, including the miles of sandy beaches along the Atlantic Ocean. 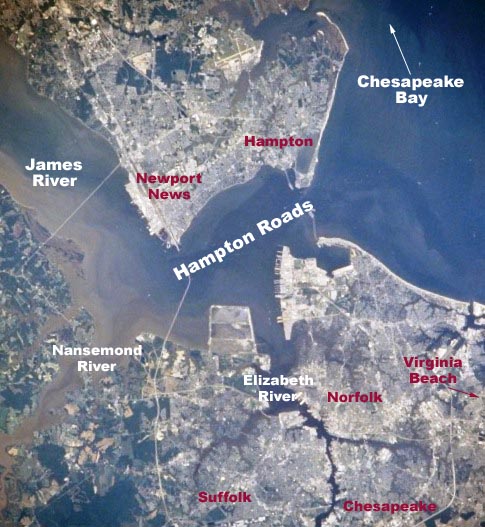