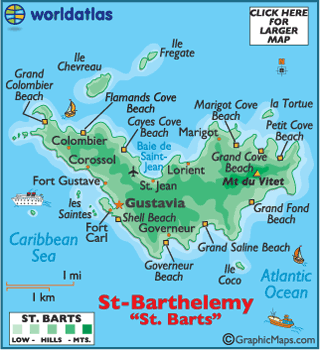 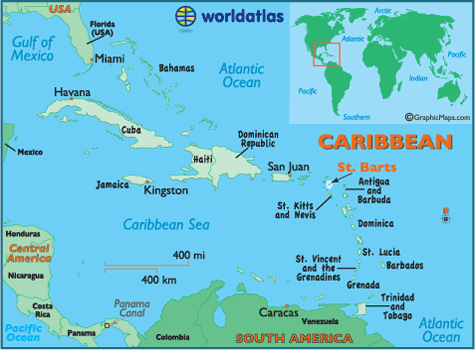 Archaeological finds suggest that before the Europeansarrived in the Caribbean, Indian tribes such as the Arawak and Caribs lived on the island for hundreds of years.

It is widely believed that St. Barts was discovered by Christopher Columbus in 1493, and he later named it in honor of his brother, Bartolomeo.

In the mid-1600s, the French arrived, fought off the Caribs the best they could, and built a small settlement. Because of the very harsh conditions and the consistent Indian raids, it soon failed.

The French returned in the 18th century and established a small colony. Pirates who preyed on the Spanish colonies, and their treasure-loaded galleons returning to Spain used St. Barts as a staging point.

Over time, some of those buccaneers (pirates) settled on the island; farming and fishing were the staples of survival as arid and rocky St. Barts was not conducive to the Caribbean's wide-spread sugar cane industry.

The French remained in control here until 1784, when the French government surprisingly sold the entire island to Sweden for some lucrative Scandinavian trading rights.

Near the end of the 19th century France repurchased the island from Sweden, but the remnants of that Sweden period remains to this day. The capital city was in fact named for Sweden's King Gustav III.

In 1946, all people on the island became citizens of France, when St. Barts, as well as the French islands of Guadeloupeand Martinique, were given the legal status of a "Department of France." All were given passports, but now all must pay taxes to the homeland.

Regardless, over the next few decades the local economy remained in a fragile state as promised economic support from France was slow to arrive. As an alternative, tourism began to develop which in the end completely transformed the island, and it now has the full support of France.

Today St. Barts is considered by many to be the Caribbean's most beautiful island, with dozens of white sand beaches, crystal clear waters and a green, hilly landscape punctuated by numerous lagoons.

St. Barts is definitely chic and upscale, and a favorite of the rich and famous. Gustavia, a duty-free port, is a picturesque place of red-roofed buildings, boutiques, a yacht-filled harbor, and a very relaxed lifestyle.

Like in all of France, the celebration of life continues on St. Barts non-stop, so pop the cork and fill your glass to the brim with the sparkling champagne that is France.

A cruise ship approaches...
by Wayne Walton
Buy This at Allposters.com

St. Barth Island...
by Godong
Buy This at Allposters.com