The archipelago of San Andres, including the larger islands of Providencia and Santa Catalina, is located about 90 miles off the eastern coastline of Nicaragua; however all of the islands belong to the country of Colombia.

Originally settled by the Spanish in 1510, the islands were once part of the Audiencia of Panama, then part of the Capitanía of Guatemala and Nicaragua.

In 1630, Providence Island was reportedly settled by English Puritans; they built cotton and sugar plantations and used slaves from Jamaica for the needed labor.

In 1670, English pirates led by Henry Morgan took over the islands, and reputedly, Henry Morgan's treasure trove is hidden in one of the island caves. And yes, people still come here to look for it.

In 1803, Spain assigned the islands and the province of Veraguas (western Panama and the east coast of Nicaragua) to the Viceroyalty of New Granada. The territory was consequently administered from the province of Cartagena in Colombia.

In 1821, during Colombia's War of Independence with Spain, Francisco de Paula Santander, one of Colombia's military and political leaders snatched the islands and raised the Colombian flag on June 23, 1822.

After the Spanish colonies became independent across theCaribbean and South America, the inhabitants of San Andres, Providence and St. Catherine voluntarily joined the Republic of Gran Colombia (now Colombia) in 1822.

In a land grab of sorts, Nicaragua claimed the islands because of their close proximity. In 1928, Colombia and Nicaragua signed a treaty, which gave control of the islands to Colombia, but that border dispute is still active to this day.

As one of the most isolated island regions in the Caribbean, the inhabited islands of San Andres, Providencia and Santa Catalina are surrounded by sandbanks and cay's, all reachable by small boat.

Near the end of the 20th century, the San Andres islands inevitably became fashionable for tourism. Although an expensive destination, snorkelers and divers come for the extensive coral reefs and clear water.

Others journey here (often by cruise ship) for the tropical weather, duty-free shopping and total relaxation. We've been here and loved it. So will you. 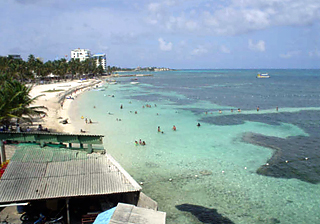 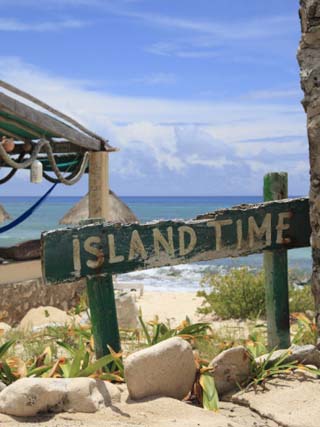 Island time...
by Wendy Connett
Buy This at Allposters.com