The Los Roques islands are a federal dependency of Venezuela, consisting of about 350 islands, cay's or islets.

The most important island is Grand Roque, as it's the only populated island in the group and has an airport suitable for small aircraft. Other important islands for visitors are Francisqui, Nordisqui, Madrisqui and Crasqui.

The archipelago itself is located about 80 miles (128 km) directly north of the port of La Guaira, and from there it's a 40-minute flight to Grand Roque.

Basically an untouched coral reef, it attracts many visitors, especially from Europe, some of which come in their own yachts and anchor in the inner, protected shallow waters. However, development and tourism are aggressively controlled by the government.

Because of the wide variety of seabirds and rich aquatic life, the Venezuelan government declared Los Roques a National Park in 1972.

Los Roques is a federal dependency of Venezuela, and flies the Venezuelan flag.

It also contains an inner lagoon, as well as sandy shallows.

ATTRACTIONS: (a few major)
The archipelago of Los Roques, famed for its coral reefs and warm waters, is a major attraction for professional and recreational scuba divers alike. Due to its distance from the mainland it is considered to be one of the top archipelagoes in the Caribbean amongst sailors, fisherman and pilots.

November marks the beginning of the lobster-fishing season with the annual Lobster Festival in Virgen del Valle.

Due to the influence of trade winds, Los Roques remains relatively dry (receiving very little rainfall throughout the year) and enjoys an average temperature of 80°F (27°C). 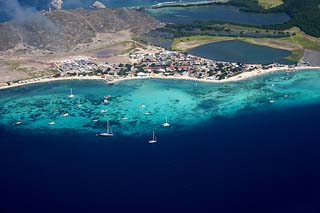 The island of Gran Roque, Los RoquesBerrucomons at en.wikipedia

Which Country Has The Most Lakes In The World?