Inside the so-called "Cave of Bones" in Romania, the oldest human remains on the continent of Europe were discovered; archeologists dated the some 42,000 years old.

In an attempt to expand its territory further north, the Roman Empire reached the Danube River in southeastern Europe in 100 AD, and established the new province of Roman Dacia.

As the Roman Empire began its decline in the late 2nd century, Dacia was invaded by the Goths, an East Germanic tribe of Scandinavian origin. Over the next five centuries a wide variety of migrating people crossed through.

In the 8th century, the Avars, a highly organized nomadic confederacy of mixed origins conquered the land, and ruled the remaining Slavic serfs in the Transylvania region until the 8th century.

In the High to Late Middle Ages, from the Black Sea coastal areas through the mountainous central, and to the western borders of what is now modern-day Hungary and Serbia, Romania was occupied by an assortment of nomadic peoples.

By the middle of the 16th century, Hungary, and most of the Balkan Peninsula including Romania's historical regions of Moldavia (northeast), Transylvania (central) and Wallachia (in the south) were under varied levels of Ottoman (Turkish) control.

Near the end of the 17th century, a league of factions (including the Hapsburg) organized by Pope Innocent XI, was sent to free Hungary from Ottoman rule and reinstate the Catholic Church. That effort stretched into Romania, and in 1699, Transylvania became a territory of the Habsburgs' Austrian empire.

The Habsburgs were one of the most important aristocratic royal houses of Europe, best known for being the origin of all of the formally elected Holy Roman Emperors between 1438 and 1740. Within a few short years the Hapsburg's occupied other small parts of Moldavia and Wallachia. 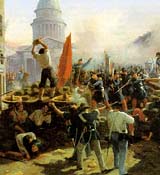 The European Revolutions of 1848 were a series of political upheavals throughout the continent. They were caused by widespread dissatisfaction with leadership; the demands of the working classes and a growing upsurge of nationalism in individual countries and regions.

It was the first (and only) Europe-wide collapse of traditional authority. During the revolutions tens of thousands of people were killed and many more forced into exile, and within one year, the powerful reactionary forces (of royalty) had won out and the revolutions collapsed.

After the failed 1848 Revolution, Romanians wanted to form a single state, but that struggle was squelched by the Austria-Hungary empire, as it kept the Romanians firmly in control, even in parts of Transylvania where Romanians constituted a local majority.

During the Russo-Turkish War of 1877–1878 between the Ottoman Empire and the Eastern Orthodox coalition led by the Russian Empire and numerous Balkan countries, Romania fought on the Russian side, and that was a good decision.

Within the 1878 Treaty of Berlin between the two warring parties, Romania was recognized as an independent state (principality) by Russia and some other European powers of the day. To make the deal Romania ceded some land along its eastern border to Russia.

For the next thirty-some years, Romania remained stable, and then came World War I. In August of 1914, when World War I began, Romania declared neutrality, but under mounting pressure from France, it joined the Allies two years later.

After disastrous defeats for its army during the first three years of the war, Romania was in no position to continue the war, and out of desperation, negotiated a peace treaty with Germany in 1918.

By war's end the Austria-Hungarian and Russian empires had disintegrated and Germany was crushed. And after Hungary eliminated all claims it had over Transylvania, Romania was (for the first time) really on its own.

From 1918 to 1938, Romania was a constitutional monarchy, but after the elections of 1937, it became a dictatorship, one ruled by King Carol II, and a group of (favorites of the King) who had significant influence from behind the scenes.

World War II was a disaster for Romania; first it entered the war on Germany's side, and then it suffered under the dictatorial rule of General Ion Victor Antonescu, a man responsible for the deaths of as many as 400,000 people, most of them Jews, as well as Romani Romanians.

In 1944, near the end of the war, Antonescu was arrested and later executed by firing squad. Romania changed sides and joined the Allies, but its role in the defeat of Nazi Germany was not recognized by the Paris Peace Conference of 1947.

With Soviet Red Army forces still stationed in Romania, Communists factions (in a rigged election) claimed the majority of the votes and established themselves as the dominant political force in the country.

King Michael I was forced by the Communists to abdicate and leave the country. Romania was proclaimed a Communist People's Republic and it remained under direct military and economic control of the Soviets (USSR) until the late 1950s.

After being looted by the Soviets for dozens of years, in 1967, internal conditions were about to get much worse, as the country entered a most repressive time. Nicolae Ceausescu assumed the presidency and his brutal dictatorial rule of corruption, terror and human rights violations almost ruined Romania.

Ceausescu's regime of abuses, thousands of unexplained deaths and other brutalities finally ended during the Romanian Revolution of 1989, when Ceausescu (and his wife), were captured, quickly brought to trial, then executed by a firing squad.

Following the revolution the country was transformed from a Communist state into a democracy, and Romanians were finally free to express what they really felt and were free to move within and outside of the country.

Former Communists dominated the government until 1996 when they were finally swept from power, and since then Romania has taken a bold step toward a free-market economy.

Black Sea resorts, hiking and skiing in the Carpathian Mountains, and the Transylvania region (of Count Dracula legend) are international tourist favorites.

And for travelers, we can't forget Bucharest; it's the most prosperous city in Romania and home to numerous cultural venues, shopping arcades and recreational areas.

Where Are Cranberries Grown?

Where Are Blueberries Grown?