The Belgium flag was officially adopted on January 23, 1831. 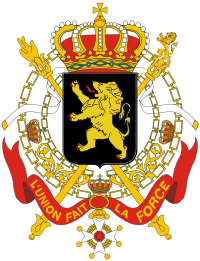 Belgium's coat of arms is composed of a golden lion against a black shield, with the royal crown resting on top, and the motto L'Union Fait La Force (Unity Makes Strength) on a ribbon below. Directly behind the shield are crossed sceptres.