his strategic island called Singapore was first inhabited by regional fishermen and pirates, and later became part of the Sumatran Empire of Srivijaya.

During the 14th century, Singapore became involved in a struggle between Siam (present-day Thailand) and the Majapahit Empire as they fought for control of the Malay Peninsula.

Defeated by the Majapahits, Singapore fell under their rule for several years, before being seized by Portugal in the early 1500s. 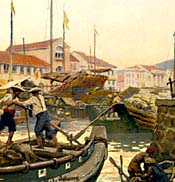 In the aftermath of the Portuguese invasion, Singapore was driven into obscurity for nearly two centuries. In 1819 it was transformed into a British trading colony as well as the site of one of Britain's most important naval bases.

In 1826, Singapore was grouped with Penang and Malacca to form the Straits Settlements, a crown colony governed by the British East India Company.

In spite of its importance within the region, the administration of the island was greatly understaffed, and there was little concern with the welfare of Singapore's citizens.

Within a few decades of the mid-1800s the population quadrupled, and with limited access to public services (including health care and education) the nature of society grew chaotic.

The Straits Settlements were split into separate Crown Colonies by the British government in April 1867, and the new colonial government moved to address Singapore's social problems.

In the early 1900s, Singapore and much of Southeast Asia were spared the effects of World War I. However, the British government set its sights on building a naval base in Singapore to deter the ever-expanding Japanese Empire.

Upon its completion in 1939, the naval base became the largest dry dock and the third-largest floating dock in the world.

As World War II raged on through the early 1940s, Singapore suffered daily air raids, and, despite their best efforts, the British troops eventually surrendered the island to Japan, making it the largest surrender in British-led forces history.

Harsh measures were imposed during Japan's occupation, and after the war's end, Singapore fell into a brief period of unrest.

The British returned to Singapore in 1945, however, due to their failure to defend the country, their reputation as acceptable leaders in the eyes of the people was greatly destroyed.

The Straits Settlements dissolved in 1946, and Singapore moved forward in establishing a new government.

For a brief time in 1963, Singapore and the states of Sabah and Sarawak joined the Peninsular Malaysia Federation; however, Singapore left in 1965 to become a separate nation.

Following its independence, Singapore set out to establish itself as a more modern region, and within a couple of decades grew into one of the world's most prosperous nations.

This modern economic powerhouse's seaport is one of the busiest in the world; in addition, Singapore has become a major worldwide banking, shipbuilding and petroleum center.

A bridge and causeway connect Singapore to the Malaysia mainland. Due to the aggressive current patterns of the Strait of Singapore, there are much needed and on-going land reclamation projects.