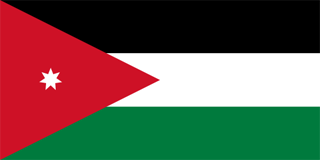 The flag of Jordan was officially adopted on April 16, 1928.

The red, green, black and white are Pan-Arab colors, and the star with seven points is said to represent the seven verses of Islamic belief that open the Qur'an. 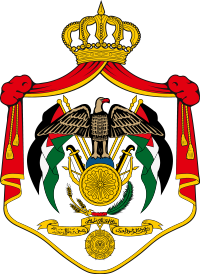 Jordan's coat of arms consists of a black eagle (symbolizing power, might and loftiness) standing on top of a bronze shield supported by two flags of Jordan, spears, swords and bows and arrows. Below the shield are two branches of wheat, a palm branch, and the decorative order of al-Nahda.

The phrase depicted on the right of the al-Nahda reads, "Abdullah II bin Al Hussein bin Aoun," (Aoun, the great grandfather of Al Sharif Al Hussein bin Ali); in the middle, "King of the Hashemite Kingdom of Jordan," and to the left, "Who seeks support and guidance from God."