The wild small cats of the world generally get only 0.1% of the funding amounts that big cats get. We examine the case of the fishing cat to determine what can we do to bridge the gap.

This reality exists in spite of the fact that fishing cat conservation in the country is backed by the strongest protection laws that list it as a Schedule I species. In recent times, conservationists have spoken up about how they believe that the law is not enough to stop these cats from vanishing.

The fishing cat is a charismatic species that is larger than the average tabby but still smaller than India’s most famous felid, the tiger. Living by its name, the fishing cat (Prionailurus viverrinus) is an exceptional swimmer who enters the water frequently to prey on fish. The feline predator prefers wetland habitats and is widely distributed in South and Southeast Asia. Surveys in recent times indicate that populations of this species are in decline within all range countries. In the past 15 years, the global population decline of fishing cats is suspected to be around 30%. Conservationists believe that the cat faces a high extinction risk throughout its range. In this article, we focus on the conservation needs of India’s fishing cats and attempt to explore the plight of this species with the help of an expert in the field. 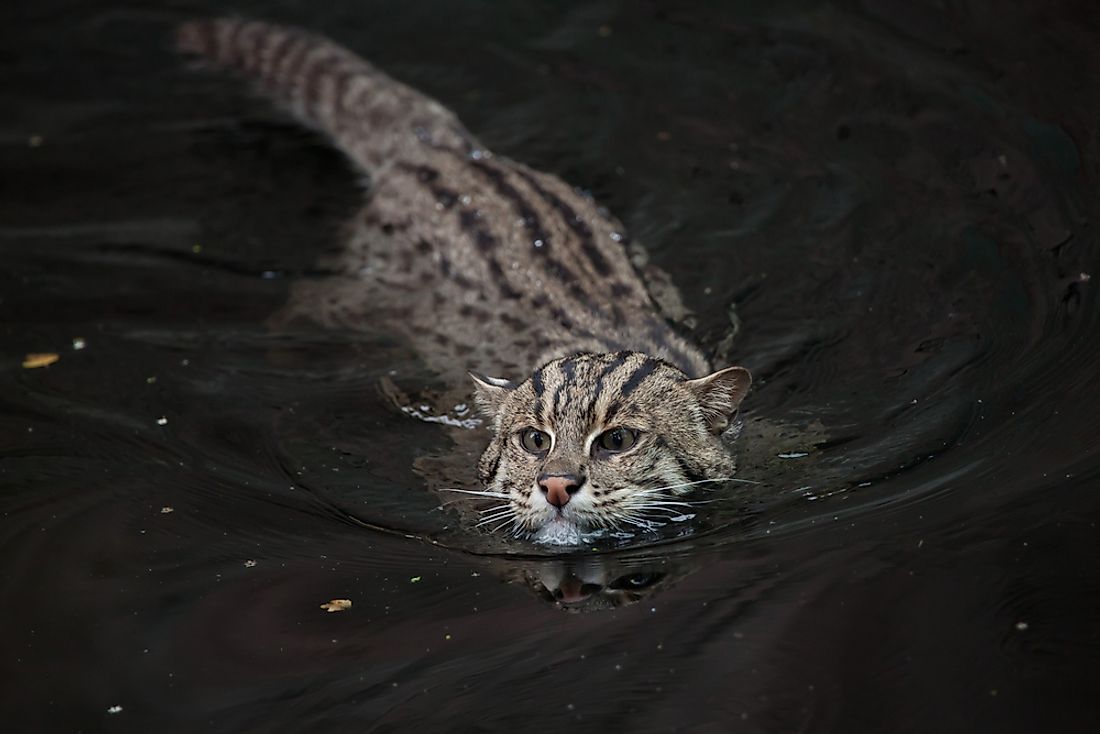 A fishing cat living up to its name and swimming in the water. Photo credit: Shutterstock.

In South Asia, the fishing cat is widely distributed in Bangladesh and Sri Lanka. The population of the cat was believed to be nearly extinct in Pakistan prior to scattered reports of the existence of this species coming to light in recent times. In Nepal, fishing cats are found in the Terai region of the Himalayan foothills along the border with India. In the latter nation, fishing cats have a patchy distribution. They have been reported to exist in the Terai region in north and northeastern India and in some protected habitats in the semi-arid region of western India. Pockets of fishing cat populations are also distributed through the eastern coast of India. The Sundarbans mangrove region in West Bengal and some patchy wetland areas in and around the city of Kolkata also host populations of this species.

The Struggle For Survival In India Fishing cats in India are no less threatened than those in other parts of the range. Here we try to inspect the threats to the fishing cats in the country and explore the ways to conserve them. For this purpose, World Atlas interviewed Ms. Tiasa Adhya, co-founder of The Fishing Cat Project, Small Wild Cat Conservation Foundation and Joint Secretary of Human & Environment Alliance League, to help us learn more about the conservation needs of India’s fishing cats.

When asked about the biggest threats to fishing cats in India, Ms. Adhya informed us:

“Ecologically blind development policies that convert wetlands are the number one threat to the Fishing Cat in India. This is followed by retaliatory killing and hunting. For instance, almost 90% of the Terai grasslands have been converted to intensive agriculture. The Yamuna and Gangetic floodplains are affected by industrialization and urbanization. Coastal wetlands are threatened by intensive aquaculture. Often Fishing Cat habitat is categorized as “wastelands” in land-use policies which makes them vulnerable to rapid conversion.”

Although fishing cats are subjected to the wrath of farmers, the cats are actually beneficial to them. Rodents that damage crops constitute a significant portion of the felid’s diet. Fishing cats are also the umbrella species of wetland habitats. Conserving the species is equivalent to protecting the wetlands which provide livelihood and sustenance to the people living in the area. Wetlands also recharge ground water.

A reliable estimate of fishing cat populations in most parts of its range, including India, is missing. Like other small felids, the fishing cat is poorly understood which could be partly attributed to the nocturnal and elusive nature of these cats that makes it difficult to study them in the wild, and partly to the lack of interest in conserving this species. Researchers thus rely on local accounts, track marks and scat observation, and camera trap studies to learn more about their presence.

“Research is sparse. We still do not have basic know-how about what determines its distribution and ecological/anthropogenic correlates affecting its abundance. Answering these basic questions are central to devising effective conservation strategies.

Funding and lack of attention are two main problems. Small cats, in general, are a less funded aggregate with all small cats combined getting only 0.1% of what bigger, charismatic felids get. Addressing lack of awareness of them through a medium of communication is thus both a significant and challenging task.”

Hope For The Future Of India’s Fishing Cats Despite the hurdles in fishing cat conservation in India, researchers like Ms. Adhya are harnessing their full potential to save the species. Some success has already been achieved in this field. In 2012, the fishing cat was declared the state animal of India’s West Bengal state where significant populations of the cat are known to occur. Awareness campaigns are conducted in fishing cat habitats to empower the locals with knowledge about these cats and their conservation needs. Road shows, distribution of handbills and posters from door-to-door, etc., are used to spread awareness. Fishing cat committees have been formed at gram panchayat and administrative block levels to allow the locals to actively participate in surveys and protection of the species.

Ms. Adhya, who has been conducting research on the felids since 2010 and has led several surveys concerning the cats, informs us that The Fishing Cat Project, India has surveyed West Bengal and the eastern coast of India to locate populations. Zoological Survey of India and the West Bengal Biodiversity Board is conducting a second survey in West Bengal.

Adhya claims that a reliable nation-wide estimate of the fishing cat population is still missing and is the need of the day.

“For a specialist like the Fishing Cat, a standard population census protocol is still to be established. The only reliable estimate of its population happened in Coringa where the density of the fishing cat was found to be high with individuals sharing territories. Since a significant population is assumed to exist outside protected areas, the use of the camera trapping method alone as a research tool could be difficult. One needs a combination of scats observation and camera traps to arrive at reliable estimates.”

Still she is hopeful about the future of fishing cats in India.

“When we started in 2010, there was minimum concern/awareness in the country about the plight of these cats. Now the picture is brighter with individuals, NGOs, and government organizations participating in the process of fishing cat conservation.”

“Currently there are three active Fishing Cat projects in the country. Apart from our project, there is the Godavari Fishing Cat Project and the Eastern Ghats Wildlife Society, both of which are doing commendable work in Andhra Pradesh.”

It is hoped that with the untiring efforts of conservationists like Adhya, fishing cats in India will attract the much-needed attention of the public and the government of the country and the populations of these cats will thrive in the years to come.**