In India, an initiative called "Project Tiger" has been a widely successful conservation effort. Is it due time for a "Project Leopard"?

For the leopards of India, this year has not been a great one. As of September, 2017’s leopard death toll stands at 336. Not only have 125 of these deaths resulted from poaching, but cases of human-leopard conflict have also been widely reported in the country. For these reasons and others, it stands to say that wildlife experts in India are concerned about the future vitality of the country’s leopard population. To examine the complicated threats facing these magnificent animals, World Atlas recently met with experts in the field who were willing to share their concerns and observations. This article is a story of what we found.

A Brief History of the Leopard Population in India

To determine whether the leopard population of India is currently under threat, it is important to first look at how the current situation measures up against other years. In 2016, 436 leopard deaths were recorded in India - including 154 killings at the hands of poachers. The data from 2014 and 2015 paints a similar picture, as leopard deaths were recorded at 397 and 328, respectively. These numbers included 127 cases of poaching in 2014 and 127 cases in 2015.

In addition, a study conducted over four years by three wildlife scientists in India found that India’s leopard population has experienced a decline measuring between 70 to 80% over the past 100 years. In fact, data from WPSI (Wildlife Protection Society of India) shows that since 2007 1,523 leopards have been killed in India.

The Indian Leopard: Under Threat or Not?

The Panthera pardus fusca, or the Indian leopard, can be found throughout the Indian subcontinent. Its range is generally within India, Pakistan, Nepal, and Bhutan, though there have been occasional sightings in Bangladesh as well. In India, leopards are protected under Schedule 1 of the Wildlife Protection Act, 1972.

Surprisingly, the first accurate picture of the leopard population and distribution in India was estimated only as recently as 2015 with a nationwide leopard census, the first of its kind in India. This study estimated the spotted cat’s population to be at 7,910, though it is important to note that this particular study excluded some areas where leopards have been known to roam, such as the northeast portion of the country. Based on these numbers, scientists estimate the country’s total leopard population to be somewhere between 12,000 and 14,000 individuals. When compared to Indian tigers, who are an endangered species, the study found the leopard to be well distributed across the country.

Numbers from the 2015 leopard census.


Based on these numbers, and their contrast against the Bengal tiger, whose total population is somewhere around the 2,500 range, it would appear that there is no reason to worry about the leopard population of India. However, digging deeper suggests otherwise.

The Complicated Relationship Between Humans and Leopards

The story of leopards and human relations in India has been largely documented as a dramatic one.

Over the past decade, leopards have been responsible for the deaths of 34 people and the injuries of 350 others in the north Indian hill state of Himachal Pradesh alone. In the Nashik in the western Indian state of Maharashtra, 12 human lives have been claimed by leopards prowling in the area between 2010 and May of 2015. Similar reports have been obtained from several other locations in the country where leopards are known to occur.

Human responses to leopard attacks vary, but instances of violent revolt have been reported over the years. There was the case in Guwahati, the capital of the northeastern state of Assam, where the Forest Department has been under pressure to remove leopards from the area because of the threat they pose to crops. In the hill state of Uttarakhand, 45 leopards were shot down by wildlife officials between 2001 and 2010 after being declared man-eaters by local protestors. In some cases, people even took the law into their own hands. Take, for example, the case of the leopard in the Gir-Somnath district of Gujarat that was beaten to death with wooden sticks and an axe by a farm laborer and his friends after the animal injured the laborer in an encounter. The leopard’s legs were tied to a heavy stone and the carcass was thrown into a river. The atrocity of the villagers did not stop here. The carcass was retrieved from the river and burnt.

These stories inform us that although poaching is a serious threat faced by India’s leopard populations, it is not the only way in which leopards are dying.

Unlike tigers, leopards have tremendous adjustability and can live very close to human habitation. Over the years, the clearing of forested land for agriculture, the encroachment of human settlements into forested areas, and anthropogenic activities like livestock grazing in leopard habitats have led to human-leopard encounters which, as we can see from the reports mentioned above, have been far from amicable.

Lt. Col. (Retd.) Shakti Ranjan Banerjee is the Honorary WPSI State Director and former State Director of the World Wildlife Fund in India. He spoke with World Atlas about what can be done to smooth the relations between leopards and humans, saying, “Public awareness is important. People should know what to do when they encounter a leopard.”

"Forest officials in the immediate neighborhood should be well prepared. They must be well-equipped" Sri Sachikanta Chakrabarti, ex-Principal Chief Conservator of Forests (PCCF) of Karnataka, India, added. He also mentions that to be successful, leopard capture and re-location requires a great deal of training and sound knowledge.

Looking Towards the Future: What Can Be Done to Ensure Leopard Longevity? 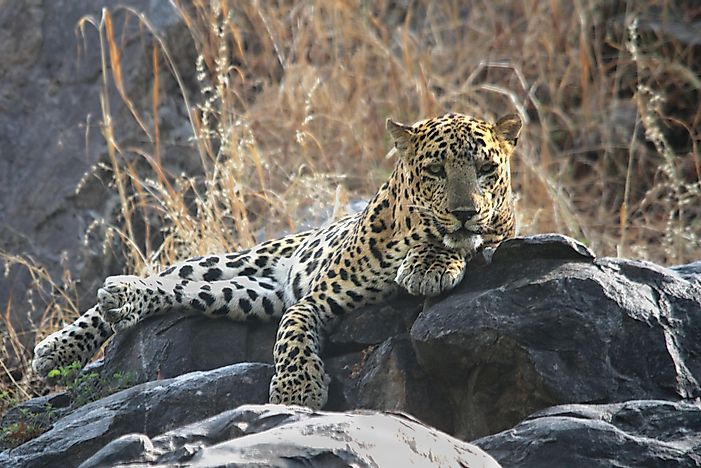 India's current human population is 1,324,171,354. The country is projected to be the world's most populated country in 2022 and by 2030, the population of India is expected to cross 1.5 billion people. With such a massive population growth, protecting India's wild species will become a major challenge. So, could the protection of India’s tigers be enough to save the leopards who inhabit the protected tiger habitats?

Research suggests such might not be the case. Previous studies have shown that competition among carnivores might reduce the density of one of the carnivores, usually the smaller and less powerful one, at a population level. Two research studies have also observed the indications of leopard avoiding tiger in Nepal’s Chitwan National Park. A 2012 research study published in the International Journal of Biodiversity Conservation found that the leopard density in the Sariska Tiger Reserve decreased upon the re-introduction of tigers in the park.

This tells us that the protection of the tiger and an increase in tiger numbers might not be good news for the leopards who inhabit India’s tiger reserves. An increase in tiger numbers may force the spotted carnivores to relocate to ‘‘competition refuges’’ to avoid direct confrontation with tigers. Such refuges usually are wedged between prime tiger habitat and human-inhabited or cultivated lands. There is a possibility here that leopard-human interactions could increase further.

From all the information and data mentioned above, we can conclude that leopard conservation in India is subjected to complex challenges. However, with every major challenge, there must be a major solution. In the case of India’s leopards, what could this solution be?

“We can have leopard sanctuaries, but we need a sufficient prey base for the leopards,” Sri Sachikanta Chakrabarti told World Atlas. “Any sanctuary for any animal is welcome," he continued, while adding that as pressure on forested land is high due to the burgeoning population, finding specific areas for leopard conservation is a practical issue.

So, where in India can we find habitats where leopards can be protected and where they face the least competition and threats from the tigers?

With the assistance of Nilanjan Roy Chowdhury, a wildlife activist based in Kolkata, India, we discovered a few reports that suggest some habitats in India where leopards thrive in the absence of tigers and could be potential contenders for the establishment of leopard sanctuaries. For example, the report of a four-fold increase in the population of leopards from 8 in 2012 to 31 in 2017 in a 126 sq km forest area located in the Haryana Aravallis has been recently published. Similarly, the Jhalana Reserve Forest in Jaipur, Rajasthan has a healthy leopard population of 14 to 15 distributed through an area of 24 sq. km. The Sanjay Gandhi National Park in Mumbai is also home to a sizeable leopard population of 30 free roaming leopards.

It is clear that setting land aside for leopard sanctuaries could be an imperative part of how the leopard population can be protected. Where the funding to do such a thing will come from is less clear.

An estimate by the Travel Operators for Tigers (TOFT) mentions in 10 years of adult life, a single tigress of the Ranthambhore National Park generated a lofty revenue of $130 million. Learning from the success of tiger tourism, could leopard tourism boost India’s economy?

This view is not surprising. In one report, we get to know how leopard tourism has helped resolve human-leopard conflict in some villages in the Pali district in the southwest of Rajasthan. The villagers here are known to worship the leopards as demigods and do not object even if their livestock gets killed by a leopard. Instead, they are grateful to the leopards for the nascent tourism industry that is growing in their area. Already, the villagers of three panchayats in the region have formed the Jawai Bandh Leopard Community Reserve that is waiting for government approval for formal recognition. Tourists include travelers from abroad, and leopards have brought prosperity to the region, the villagers believe.

Thanks to the successful conservation strategies adopted to protect the tigers of India since the launch of the Project Tiger in 1973, the tiger population in the country has significantly increased. The project was a roaring success and today, there are 50 tiger reserves in the country while the tiger population has undergone a dramatic increase from only 1,411 tigers in 2006 to 2,226 in 2014. The funds allocated for the project were directed at combating tiger poachers and relocating villagers to reduce human-tiger conflicts.

Learning from the success of Project Tiger, could a similar initiative motivate leopard conservation in India? Could Project Leopard be the ultimate solution to save the leopards of the country?

“There is a need to focus on animals like leopards now,” says Lt. Col. (Retd.) Banerjee, who also reiterated that leopard tourism must be encouraged in the country.

Although a better future for the leopard population of India is certainly possible, it is clear that a multifaceted plan is the best step to take in ensuring such a thing. If well-tailored conservation strategies are adopted and the masses of the nation are motivated to protect the majestic predator through tourism, leopard conservation efforts could succeed. Additionally, launching Project Leopard on a national level and establishing leopard-specific sanctuaries could be some of the other actions that could save the future of these majestic animals.