A remote Brazilian island three miles off the northern state of Amapá serves as a nursery of jaguars, one of the largest predators in South America.

A remote Brazilian island three miles off the northern state of Amapá serves as a nursery of jaguars, one of the largest predators in South America. Here, a small jaguar population thrives off fish that it hunts by jumping into the sea, a unique trait spotted for the first time in Amazonian jaguars.

27 jaguars reside in this 600 sq km island. The jaguar density here is incredibly high - 5 to 6 cats per 100 sq km compared to the norm of around 1 to 2 in other parts of the species' range.

Thus, according to fishermen, the island “produces jaguars.”

Besides these felids, Maracá-Jipioca is host to many other animals like deer, monkeys, buffalos, and lizards that serve as prey for the apex predator. But researchers believe that it is the plentiful supply of marine fish that is the secret to the success of the island's flourishing jaguar population. According to WWF senior program officer Marcelo Oliveira, it is the first time that jaguars entering the sea to catch prey has been recorded. 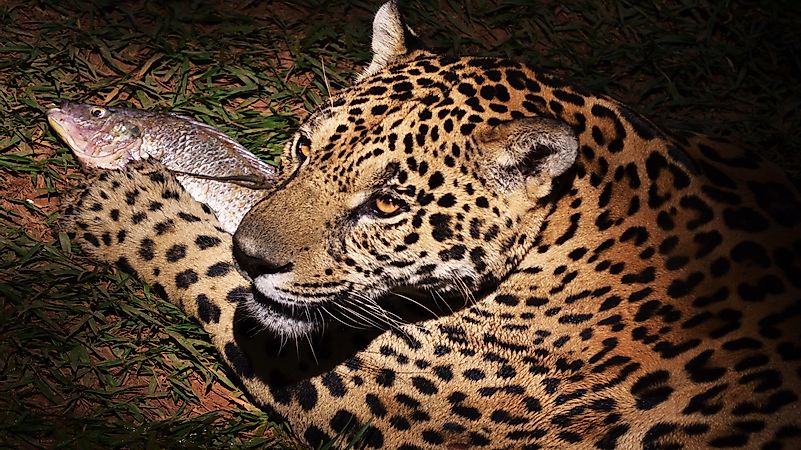 No other population of this species is known to have fish as such an essential part of their diet. There are two ways the jaguars of Maracá-Jipioca catch fish. One is by hunting for fish in the tide pools in mangroves and the other is by directly entering the sea for fish hunting.

WWF researchers are busy studying these cats and their unique behavior and have already set up several camera traps and collared three cats to serve the purpose.

They believe that the jaguars of this island are fuelling populations on the mainland.

However, there is also some bad news for Maracá-Jipioca’s jaguars who dare leave the island's safety and venture to the mainland which is not really a welcoming habitat for them. Here, there are villages with people who feel threatened by their presence. At the end of 2018, a female jaguar and her cub were killed by the villagers in the area.

Jaguars elsewhere are also not doing very well. IUCN lists the species as near threatened on the red list. Illegal wildlife trade and deforestation continue to endanger them. With the shadow of climate change looming large, sea level rise might sound the death knell for Maracá-Jipioca’s jaguars. Monitoring their population and habitat is thus of vital importance to save the jaguar nursery and its unique felids.