After years of debates and controversies, the Supreme Court of India has allowed the introduction of African cheetahs in India.

A monumental decision was taken by India’s Supreme Court on Tuesday when it allowed the Centre to introduce the African Cheetah in suitable habitat in the country. The decision came almost a decade after the plan was envisaged by Jairam Ramesh, the then environment minister of India.

In a country that has set exemplary examples in conserving her tigers, lions, and leopards, but lost only the Asiatic cheetah among the large carnivores, the plans of reintroduction of this charismatic species is definitely a cause of nationwide excitement and a major harbinger of hope.

A Brief Story Of India’s Cheetahs

The demise of the Asiatic cheetah in India can be exclusively blamed on overhunting.

This carnivore was once abundant in the region that is now India with the earliest evidence of its existence dating back to 2500 BCE to 2300 BCE. A diverse range of habitats including scrubland, bushland, and arid to semiarid landscapes were home to India’s Asiatic cheetahs. During the medieval times, the Indian kings and nobles would domesticate cheetahs in large numbers and train them to hunt blackbucks and other wildlife. Unfortunately, the inability of the cheetahs to breed successfully in captivity translated to constant trapping of the species from the wild to meet the demand. During the Mughal rule, the market for captive cheetahs soared higher than ever before. However, their fate was sealed only with the arrival of the British in India. Never before had any power wanted to exterminate a species completely as did the British. They classified the cheetah as vermin and rewarded those who killed the adults and cubs of the species. An extremely unfortunate state of events for an animal that was otherwise treated as a royal pet and hunting companion in pre-British India. By the 1950s, no Asiatic cheetah was to be found in the Indian subcontinent.

Learn more about the history of the Asiatic Cheetah and its demise in this World Atlas article.

Plants To Reintroduce The Magnificent Cheetah 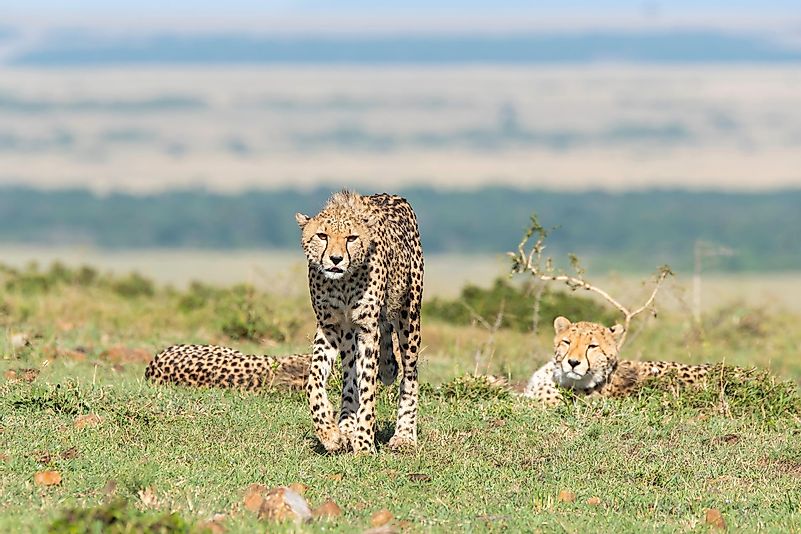 Once India realized its loss following the country’s independence from British rule, it was too late. No cheetahs were left to revive. In the early 1970s, attempts were made to negotiate the import of cheetahs from Iran, the last stronghold of the Asiatic cheetah. However, even in Iran, these animals were facing extreme threats and were highly dispersed and had low numbers. The negotiations between the two countries did not bear fruit and India did not get back the species.

In more recent times, conservationists in India have made several attempts to reintroduce the species in the country. This time, the strategy was different. Instead of trying to get Asiatic cheetahs from Iran whose numbers were further dwindling, they decided to bring the African cheetahs instead. Extensive surveys and plans were made for years to determine suitable habitats for the animals in the country. Progress was made in this regard with some sites in Madhya Pradesh, Chhattisgarh, Rajasthan, and Gujarat being identified for the purpose.

Proponents of African cheetah introduction claim that if successfully introduced, the cheetahs will help revive the grassland ecosystem of India that is presently in a state of degradation. Like the tiger is for forests, cheetahs would become the symbol of hope for India’s grasslands.

Overcoming Opposition To The Reintroduction Program

There were, however, several opponents to the cheetah re-introduction plan as well. A section of conservationists believed that hasty decisions in this direction would only create more trouble. Cheetahs demand large tracts of livestock-free and human habitation free grasslands with a rich prey base. Such areas are hard to find in a densely populated country. Also, species reintroduction events in India's past has a chequered history. Success rates have been low. Even the apex court, the Supreme Court of India, ruled against the Centre’s plan of bringing African cheetahs to India in 2013 on the basis that a more detailed study was needed before introducing a foreign species in the country.

Finally, after years of rigorous surveys and extensive scientific studies, the National Tiger Conservation Authority (NTCA) once more presented the application for the ambitious project before the Supreme Court. This time the apex court gave a go-ahead. However, the court will continue to monitor the progress of the project and have asked the NTCA to submit reports every four months. The court has also suggested a comprehensive survey to be conducted to locate the most suitable site for the re-introduction of the species.