Albania is partly a broad and swampy coastal plain fronting the Adriatic Sea. From there, making up roughly 70% of the country, the land rises into hills and mountains.

Major ranges include the Albanian Alps, and the Korab and Pindus Mountains. The highest point is Mt. Karabit in the Korab mountains, which runs along and through the Macedonia border, at 9,066 ft (2,764 m).

From the mountains, flowing inland toward the Adriatic Sea, significant rivers include the Drin and Vlore.

The three major lakes of Albania include Shkodra (shared with Montenegro), Ohrid and Prespa (both shared with Macedonia). Lake Ohrid is the deepest lake in the Balkans, and reaches depths of 935 ft (284 m). 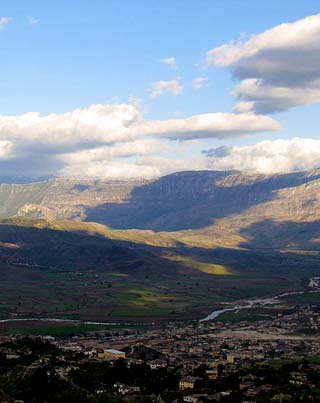