The blue glaucus is quite popular as far as sea creatures go. These little bright blue dragons tend to attract a crowd wherever they appear. Nothing is surprising about that considering that they are indeed quite magnificent in their appearance. They are also so small that it's hard to imagine that they would be able to cause any injury. However, if you ever come across these blue angels (officially known as Glaucus atlanticus), as they are sometimes called, be cautious and move quickly in the opposite direction. They may be small and beautiful, but can they certainly pack a punch.

What Are They Even?

The blue glaucus slug isn't your typical run-of-the-mill sea slug. They have a gas-filled sac inside their belly which enables them to float on the ocean's surface. During drifting, they will use their little feet to snatch jellyfish and feast on them. The feasting isn't as pretty looking as the Blue Glaucus itself. They have rows of razor-sharp teeth and an amazingly strong jaw that allows them to rip the flesh of their prey.

They are not only problematic for the unsuspecting jellyfish, but also for humans. After consuming a venomous prey, they can use the poison in a time of need, and it becomes even more toxic than it was initially. Although they aren't exactly a daily occurrence on the beaches, they do have a preference for warmer oceans, which typically means they are sighted on Australian shores.

It's quite extraordinary that this powerful creature that is capable of literally tearing a jellyfish to bits grows no more than a little over 1 inch (3 cm). 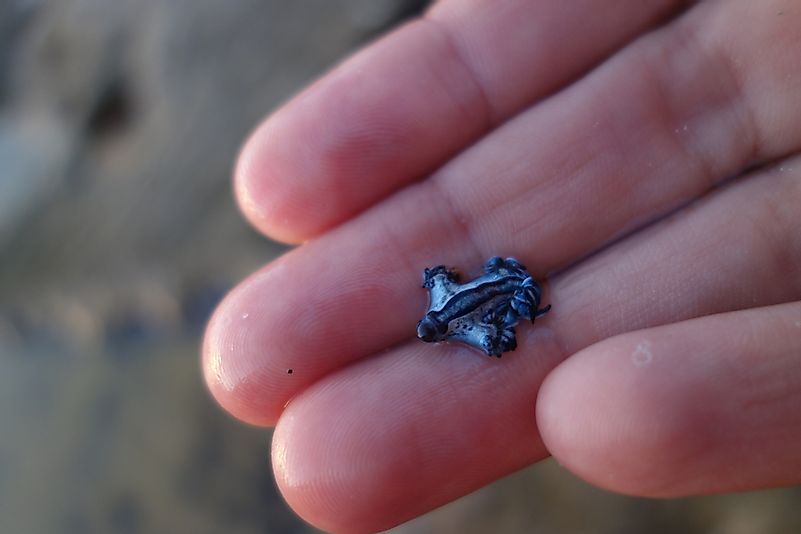 While floating on the water's surface, Glaucus Atlanticus does so upside down. The reason is to protect themselves from predators coming from above as well as those roaming in the waters below it. The underbelly of the Blue Glaucus is bright blue, which helps it to stay undetected in the water if seen from above. The back is "painted" in a monotone gray tone that allows the same thing from below the surface.

Technically, the Glaucus Atlanticus is neither poisonous nor venomous, at least not on its own. They use the poison of other creatures to defend themselves from their predators.

Their prey of choice is a Portuguese man o' war that packs a potent poison in its exceptionally long tentacles. The little sea slug stores the poison inside its body and enhances it for future life or death occurrence. Next time the Blue Glaucus encounters a potential threat, it will deliver a sting that is exceedingly more powerful than that of the Man o'war itself.

Considering the natural habitat of these fascinating creatures, it's not surprising that there isn't much knowledge about its conservation status, which is typical for these types of small marine creatures.

This page was last updated on November 13, 2019.
By Antonia Čirjak