The village of Zalipie, which is located in Poland, has a population of fewer than 1,000 people (743 in 2004) and is one of the most unique destinations in the world. It is one of the most beautiful places in Europe but not because of expensive hotels, skyscrapers or such. What makes the village unique is that its residents are known to have a tradition of painting floral motifs on everything, which has earned it its alias of “The Painted Village.” This tradition goes back to the 1800s and today, its schools, homes, churches, dog cages, fences, and old fountains among others have beautiful flower paintings. The village is located in Dabrowa County in the Voivodeship of Lesser Poland, ninety minutes away from its regional capital, Krakow. The town is now frequented by visitors who want to experience the artful bright village.

History of the Painted Village

The village’s story is that more than 100 years ago one woman who was a resident of Zalipie decided to paint flowers on her house. She did this to cover up the soot that was being emitted by their stoves which used wood as fuel. This habit was later borrowed by the other females and thanks to the smoky stoves; the women would have to paint the smudged wall with flowers every time they appeared.

Back in the days, the women did not have professional equipment to make the paint and would, therefore, make the color using cooking fat and some dye. The brushes, on the other hand, were made from the hairy parts of cow tails. This tradition took root and even after the invention of chimneys which had improved ventilation systems and never smudged the walls, the residents continued with it and was passed on to every generation. They went on to paint the walls, ceilings and everything else. There is, however, no or little evidence supporting this story. 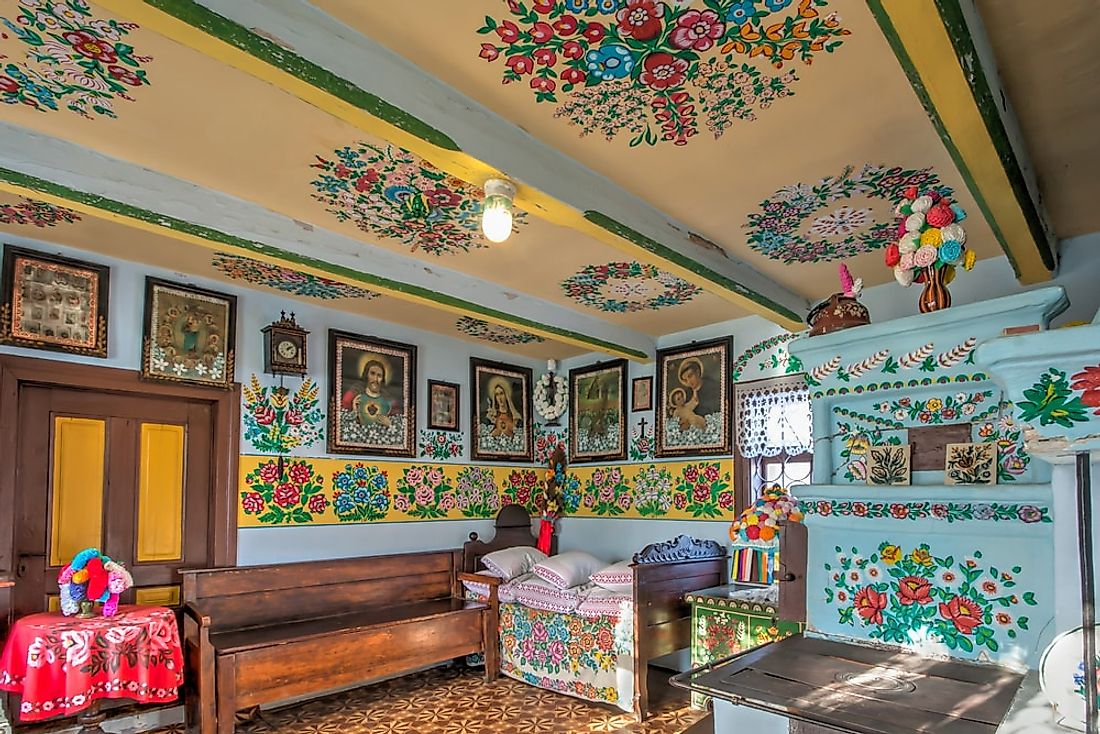 Inside the home of Felicja Curylowa, now a museum. Editorial credit: Nowaczyk / Shutterstock.com

The Painted Cottage Competition, also known as the Malowana Chata, is an event that takes in the village thanks to the painting tradition (June 17th and 18th). When the painting started, the women had to repaint the flowers each year which was preceded by the Feat of Corpus Christi. This led to the birth of this competition since 1948. The competition’s first date is very vital as it was right after the Second World War ended. This war wiped out 17% of the Polish people, and it was, therefore, a try by the officials to make people forget about the suffering in Zalipie.

It is rewarding to visit Zalipie to get away from the busy and noisy streets of the urban parts. The village also turned the house of one Felicja Curylowa who painted every surface of her three-bedroom home with flowers. After she passed away, the cottage, which is full of paintings from spoons, bulbs, and every inch became a museum. The pictures of the unique Zalipie can now be seen with the click of a button courtesy of the internet. Regardless of its stunning beauty, Zalipie has somewhat low tourist numbers.