It’s easy to believe that the planet is unchangeable until we start to feel the earth begin to shift and vibrate furiously as it does when an earthquake hits. With buildings destroyed, cracks appearing in the soil, and people both figuratively and literally shaken, the Earth truly shows its power and fury in an earthquake.

These hugely destructive events aren't a random occurrence, they've actually been building and growing in strength for millennia. Through some understanding of how the planet works, it can help to explain why sometimes its massive power is unleashed through these disasters known as earthquakes.

What Causes an Earthquake?

The shaking motion of an earthquake is the result of a sudden release of stress building up within rocks of the earth's crust. Rocks crack and slip past each other causing seismic waves that make the surface of the earth vibrate.


As tectonic plates release and break their tension against one another, the sudden shift cases a major release of energy, which we call an earthquake.

As the tectonic plates shift, they can get locked together. The hard bedrock that lives deep underneath the soil hooks onto the bedrock of another plate and neither plate will give way. Continual tectonic shifting causes an increasing build-up of physical tension between these plates of the earth’s crust.

Eventually, the underlying bedrock between the two plates breaks which allows the plates to release from each other. A figurative sling-shot of landmasses occurs, where the plates release the energy they've been building, which is when earthquakes happen. The point where the break occurs, typically at some depth underground, is called the focus. The point at the surface of land directly above a focus of an earthquake is called the epicenter.

This build-up of energy and quick release causes energy to be released fairly uncontrollably, and one such way is through seismic waves, which are thrown in every direction. These waves of energy cause the ground to reverberate and send shockwaves through the earth. This is the destructive part of the earthquake, as most buildings aren't designed to have their foundations moved and shifted.

Why do Earthquakes Occur? 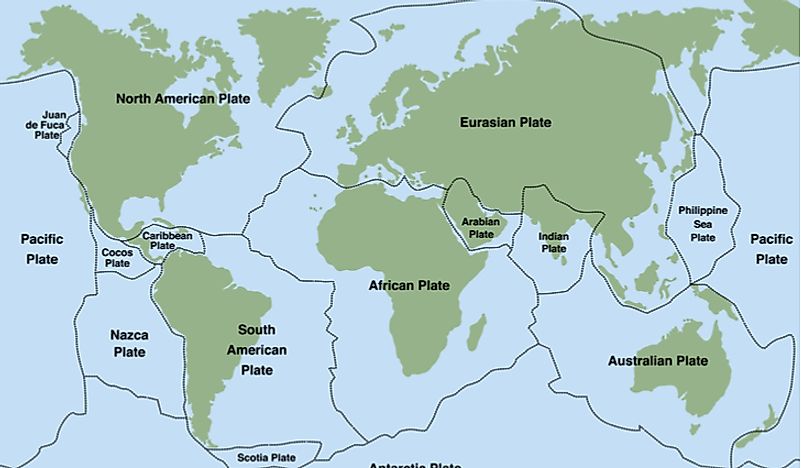 A map showing plate boundaries of the Earth. The Earth's tectonic plates are always slowly moving against one another. When they push against one another and the stress of their collision overcomes the friction felt between then, earthquakes happen. When plates slip, land formations such as mountains are made.

The Earth may seem as if it’s stable and unchanging, but in reality, the surface of the planet is like a thin layer of stone jigsaw puzzle pieces floating on a hot ball of molten rock. These puzzle pieces, or tectonic plates, form the Earth’s surface and are constantly shifting, and grinding together, due to currents occurring in the Earth’s lower mantle below.

Because of temperatures caused by extremely high pressure, the center of our planet is molten. The center is much more compact, so it is hotter (6,000°C) and more fluid than the layers closest to the surface. This difference in temperature causes uneven convection currents that rise from the inner core and spread out once they reach the more viscous mantle (the layer directly below the tectonic plates).

This upward and uneven motion helps to shift the tectonic plates. This shifting causes plates to smash up against each other; spill over on top of one another, and to pull apart from each other. These tectonic collisions and displacements form the oceanic rifts and mountain ranges, volcanoes, new islands, and other geographic phenomena. This grinding and smashing is also what causes earthquakes.

How are Earthquakes Measured? 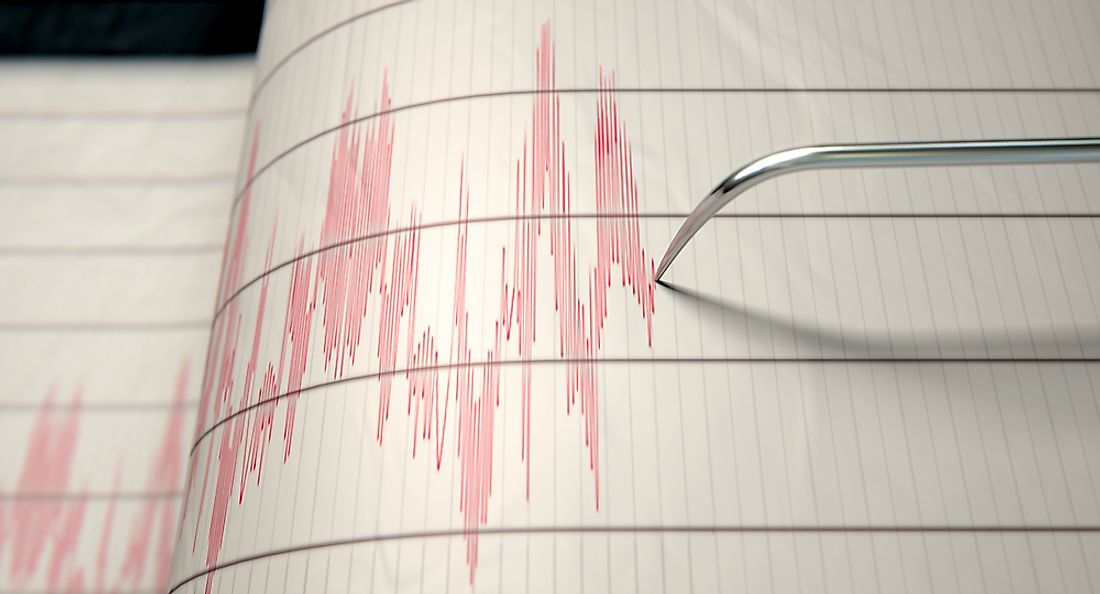 A seismograph recording the vibrations caused by an earthquake.

The shaking motion of an earthquake is the result of a sudden release of stress building up within rocks of the earth's crust. Rocks crack and slip past each other causing seismic waves that make the surface of the earth vibrate. As tectonic plates release and break their tension against one another, the sudden shift cases a major release of energy, which we call an earthquake.

This page was last updated on July 12, 2018.
By Brandon Henander