Quick, grab a glass of eggnog! It's time to learn about the history of Christmas.

Why is Christmas celebrated on December 25?

Christmas was a day that tied Christianity to many different religions in the areas where it took over.  The Romans celebrated Saturnalia during this time. The Norse celebrated Yule. Many of the Celts celebrated the solstice. The time of year, with its cold and its declining sunlight, spoke of the darkness of the year. Jesus, Sol, Mithra, all were associated with the return of the light. As Christianity moved around the world, it was influenced by those it encountered. The first record of Christmas being celebrated on December 25th was in 336 when Constantine was emperor. He was the first Christian Roman emperor.

What was the first Christmas carol?

There are many old songs that were associated with Christmas. However, the oldest song that is most familiar to audiences today is probably “God Rest Ye Merry Gentlemen.” The lyrics that we know today are from the 19th century, however there are older lyrics that go back to at least the 16th century. The carol is a traditional English Christmas Carol. As a song, it has been mentioned several different places, including Charles Dickens’ A Christmas Carol. The song is also known as “Tidings of Comfort and Joy.”

Why do we eat candy canes? 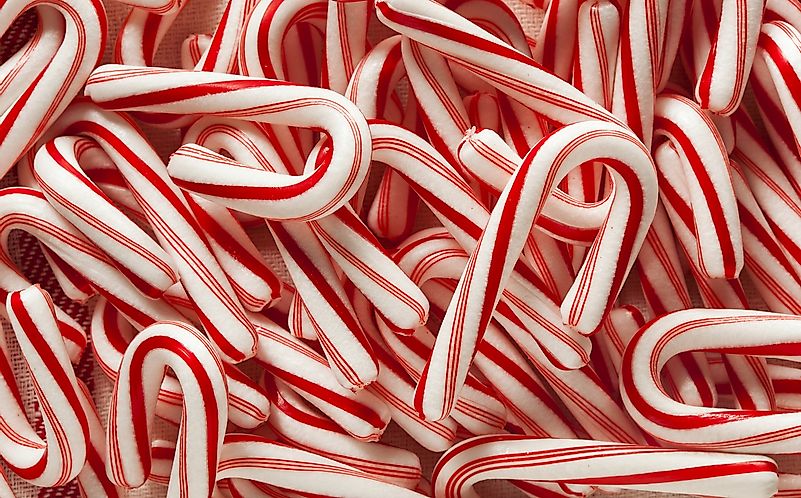 There are so many varied legends and myths about why the candy cane is something that we eat at Christmas time. The most-cited historical reference goes back to Cologne Cathedral in Germany where accounts vary as to the specific circumstances. One story says that the sugar sticks were bent into the shape of a shepherd’s staff by a smart choirmaster. He gave them to the children so that they would stay quiet during the very long Mass. Another version of this story says that the candy was made to keep children quiet while they participated in a living nativity scene. Either way, the origin of the candy’s link to Christmas seems to be its use as a handy way to keep children quiet and engaged. Beyond these legends, there are several explanations for the candy’s form. Here's a list of some of the most prevalent:

When did candy canes become common in the United States?

The first known use of candy canes in the United States is fairly agreed upon: 1847, in Wooster Ohio, by August Imgard, a German-Swedish immigrant. However, it wasn’t actually until the beginning of the 20th century that candy canes were sold in red and white. Before that, they were actually all white! Also, it’s most likely that the peppermint flavor was added at this time.  Today, candy canes are the most popular non-chocolate candy sold during the month of December. In fact, 90 percent of annual candy cane sales occur between Thanksgiving and Christmas day

Why do we hang stockings?

This tradition lends itself to several origin stories as well. One of the most common tells the story of St. Nicholas of Myra (in modern-day Turkey). Nicholas was the bishop of the region and was known for his secret gift-giving. One day, he overheard a nobleman (a widower) telling of how he could not afford dowries to pay for his daughters’ weddings. Instead, he was going to sell them into prostitution. For three consecutive nights, Nicholas dropped sacks of gold coins down the chimney of the house—one sack for each daughter’s dowry. The legend goes that some of the coins got stuck in a stocking that was drying on the mantel. 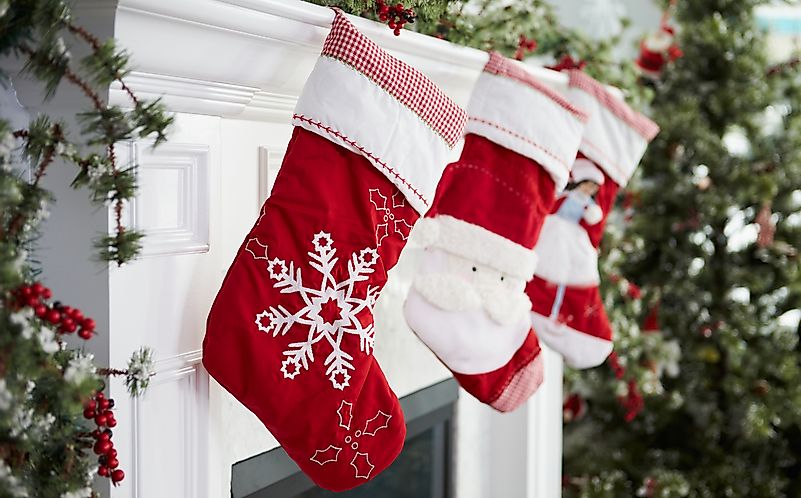 There is also some connection to Sinterklaas, a Dutch legend, based on St. Nicholas. The feast of Sinterklaas is celebrated on December 5th (St. Nicholas’ Eve) or 6th (St. Nicholas Day), depending on what country you live in. For this celebration, you lay shoes outside your door, and gifts are found inside of your shoes. There is speculation that the shoes became stockings over time and that the day migrated from St. Nicholas Day to Christmas over the centuries.

The final potential origin for the tradition of hanging stockings brings us to the tenuous connection between St. Nicholas and Odin. Odin, the “Allfather” of the Norse pantheon, was known to ride on an eight-legged horse during Yule and leave gifts for the children who left food to feed his horse (sugar, carrots, hay). This origin is not one that everyone agrees on; some scholars believe that the Germanic/Norse influences are strong while others disagree. Odin’s influence is a perfect segue to discuss the existence of Santa.

Where does the existence of Santa come from?

The story of Santa Claus, otherwise known as Father Christmas, or St. Nick, does have its origins in the St. Nicholas who was named earlier. He was well known in the third and fourth centuries. Nicholas’ reputation was one of kindness and of being a miracle-worker. Over the years, the legend of St. Nick faded, apart from the countries that celebrated Sinterklaas and St. Nicholas Eve. The reason that Nicholas was still remembered in these places seems to be tied back to relics of Nicholas making their way to Europe around the 11th century. Father Christmas was a distinctly British component of the morphed Santa Claus; Father Christmas was the personification of Christmas and has its origins in the 15th — 17th century, where he was tied to the “old traditions.” In fact, it wasn’t until Victorian England that Father Christmas concerned himself with gift-bringing. Previous to then, Father Christmas was mostly involved with adults.  Syncretization, or a melding of new religious traditions and beliefs with the local religious beliefs and traditions, is part of the Odin theory mentioned in the previous section. Lastly, today’s “Santa Claus” isn’t really that old— his roots go back to the mid 1800s!

The practice of leaving cookies out for Santa does have its origin in Yule and the Germanic influence of Odin/Woden. The aforementioned sugar, hay, and carrots focused on feeding Sleipner, Odin’s eight-legged horse. The custom that we have in the United States of leaving cookies out for Santa really came to the fore during the Great Depression: it was a way for parents to teach their children about gratitude and consideration for others, even when money was tight. Today, many families have elaborate rituals around the treats and sweets left out for both Santa and his reindeer. And in the mornings, if you’re lucky, Santa’s reindeer will have left a bite in the carrots, and perhaps you’ll even see an outline of Santa’s mustache and beard on the cup of milk that was left out for him.

What is the origin of mistletoe?

Mistletoe (and holly) is another bearer of a variety of religious traditions! Mistletoe and holly figured in the Celtic celebration of the winter solstice on December 21st. Mistletoe represented life and holly was believed to protect those from evil spirits. The kissing under the mistletoe tradition harkens from Norse mythology. Mistletoe was used to bring Odin’s son Baldur back from the dead. Frigg, Baldur’s mother, was also the goddess of love. In gratitude for the role mistletoe played in bringing her son back to life, Frigg made the plane a symbol of love and vowed to kiss anyone who passed underneath it. This story, like many of the others, has varied endings. In alternate stories, Baldur is not brought back to life, but the mistletoe is still tied to Frigg and love. It just goes to show you that time changes stories and tales.

Christmas trees – what's the deal with them? 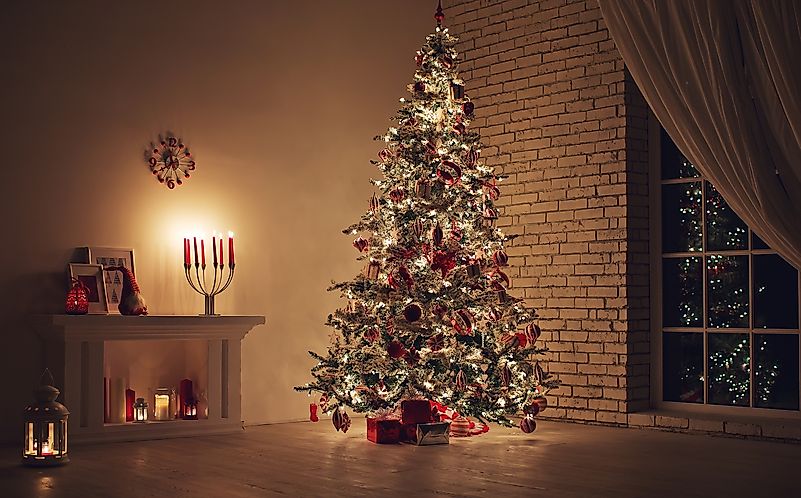 As far as we know, Christmas trees originated with Martin Luther, in the 16th century. Luther, a theologian, is also known for starting the Protestant Revolution. Supposedly, Luther was walking home, composing a sermon, and caught the twinkle of the stars shining through the branches of an evergreen tree. Wanting to show his family how it looked, he brought a tree into his home and lit the candles. This story may or may not be true, but it is widely believed. Although many German immigrants brought the custom of Christmas trees with them to the United States, it wasn’t until the late 1800s that Christmas trees became more commonplace. Prior to this, it was viewed as an oddity by most Americans and Brits. The real heyday of trees came about after electricity in homes became common; lights could remain lit for weeks, safely.

Why we drink eggnog?

Originally, the ingredients for eggnog were very expensive. It was considered a warm drink for cold winter nights. The brandy and sherry helped keep the creamy drink from spoiling and the expensiveness of the ingredients meant that only the British aristocracy, with its wealth, could afford to drink the delight. In the American colonies, in the 1700s, colonists chose to use cheaper rum instead of sherry and brandy. Although the origin of the link between eggnog and Christmas isn’t super clear, it does seem likely that the drink (while more affordable than its brandy counterpart) would’ve been saved for special occasions and drinking a cream-based warm drink during the summer heat wouldn’t have held much appeal.

Why do we use Christmas Lights?

The use of lights at Christmas begins with the association of Jesus as the light of the world, shedding light into the darkness. It also remembers the light that would’ve caught Mary and Joseph’s eyes while they were traveling in the dark night, drawing them to the inn. The use of lights on trees harkens back to Roman times. Electric Christmas lights were invented by Edward Johnson, one of Thomas Edison’s partners: he was the first person to wrap lights around a Christmas tree. The first electric-lit White House Christmas tree was in 1895 when President Cleveland’s tree had more than 100 lights strung around it. This was the beginning of the craze, however in the early years, Christmas lights were very dangerous and expensive. In the 1920s, the first outdoor Christmas lights were manufactured and sold. Today Christmas lights are one of the highlights of the season and many families drive around neighborhoods enjoying the lights as part of their holiday traditions.

Why do we decorate houses? 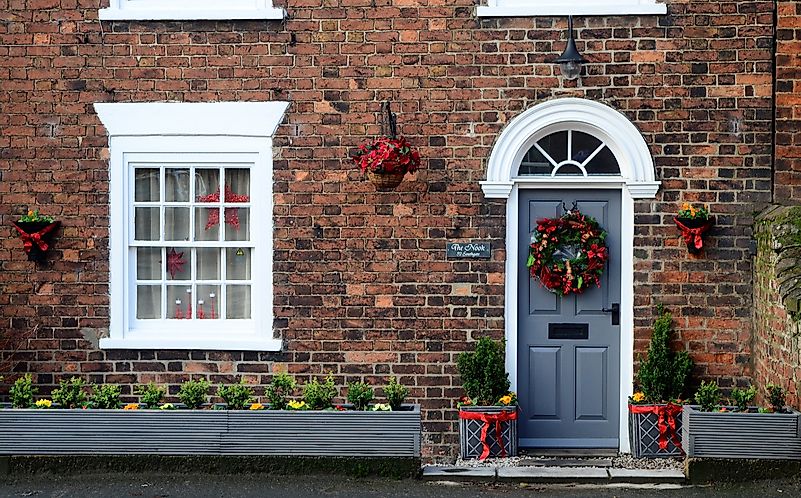 There are many reasons that we decorate houses to celebrate the season! Before Christianity, people would bring greenery into their homes to decorate houses and places of worship. Holly and ivy were believed to have magical properties. The forever green of the evergreen plants also was a reason that people brought the plants into their homes. Another component that has pre-Christian origins is the tradition of a yule log comes from when yule (a nordic winter celebration) and the celebration of solstice were combined: you’d bring in one huge log that was supposed to stay lit for the entire time of the festivities. The light of the Yule log was eventually associated with the light of Jesus, entering the dark world. Another common house decoration, placing wreaths on doors, is associated with Christianity— the circular shape is linked with Advent and the lighting of the Advent candles on the wreath during the four weeks before Christmas. Something important to know about decorating homes is that it’s believed to be bad luck to take them down before January 5th. All the decorations should remain up until the eve of the twelfth day of Christmas.

This page was last updated on December 16, 2019.
By Monica Herald