Japan is an archipelago of mountains and coastlines, ranging from the warm subtropical south to relatively cold north. Japan’s coastlines, mountains, and rivers house varied flora and fauna, some of which are endemic. 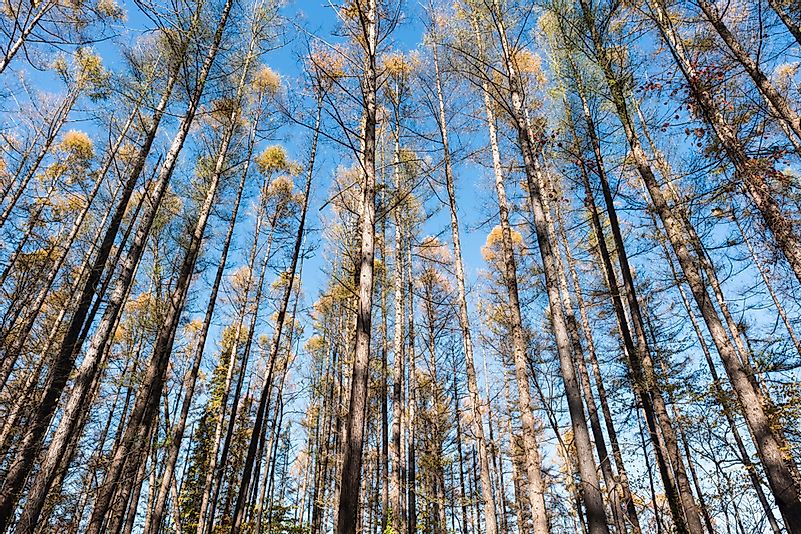 The Hokkaidō deciduous forests ecoregion is classified in the temperate broadleaf and mixed forests Biome. This ecoregion covers the plains and low hills of the Japanese Island of Hokkaidō. The region is characterized by conifers, oaks, ash, basswoods and an undergrowth of dwarf bamboo. The region’s average annual rainfall is recorded at 1,150 mm while the average temperature is 8 degrees centigrade.

The region’s trees are home to over 200 avifauna species such as Tufted Puffin, willow tit, white-tailed sea eagle, and the endangered Japanese crane and Blakiston’s fish owl. Mammal species in the region include the red fox, Sika deer, and the Hokkaido brown bear. The ecoregion faces some environmental threats from logging and overgrazing to harvesting of the plants for medicine and poaching. Development infrastructure has also negatively impacted on the region. Although conservation efforts have been initiated, they are not enough to adequately protect the region’s flora and fauna. 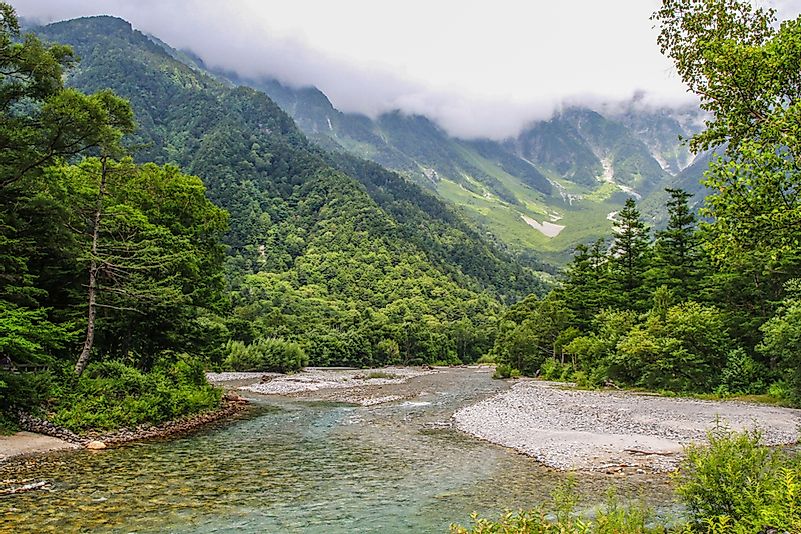 The Honshū alpine conifer forests ecoregion is classified in the temperate coniferous forests Biome. The ecoregion covers mountainous regions across the northeastern region of Honshū and part of the Oshima Peninsula in Hokkaidō Island. Spruce and fir species dominate the landscape including Jezo Spruce and Veitch’s Fir. The trees support an undergrowth of shrubs, mosses, and thicket.

The region is home to abundant avifauna species such as the spotted nutcracker, arctic warbler, golden eagle, and the rock ptarmigan. The Yezo brown bear, Asian black bear, and the Sika deer inhabit the ecoregion.

The region is continuously threatened by poaching, infrastructures such as roads, land transformation, and tourism. Protected areas include the Mount Hakusan National Park and Azumayama Forest Ecosystem Reserve.

The Sea Of Okhotsk 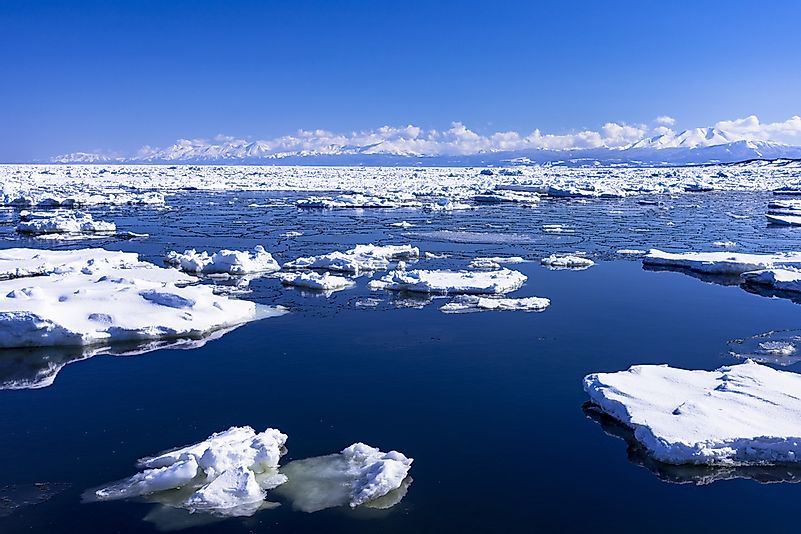 The Sea of Okhotsk ecoregion is classified in the Marine Temperate Northern Pacific Biome. The ecoregion covers numerous islands separating the Sea from the Pacific Ocean, including Japan’s second-largest island of Hokkaido. While the northern region is relatively shallow, other parts of the sea are as deep as 1,500 meters. The water’s depths are cold, with temperatures estimated at -1.7 degrees Celsius.

Aqua-fauna is abundant in this ecoregion, with species such as walleye pollock, Pacific sardine, golden king crab, and herring. Animals in the region include the Northern fur seal, steller’s sea lion, and ribbon seal. The Sea of Okhotsk ecoregion is threatened by overfishing, water pollution, and oil exploration activities. The Shiretoko National Park in Hokkaido lies in this ecoregion. 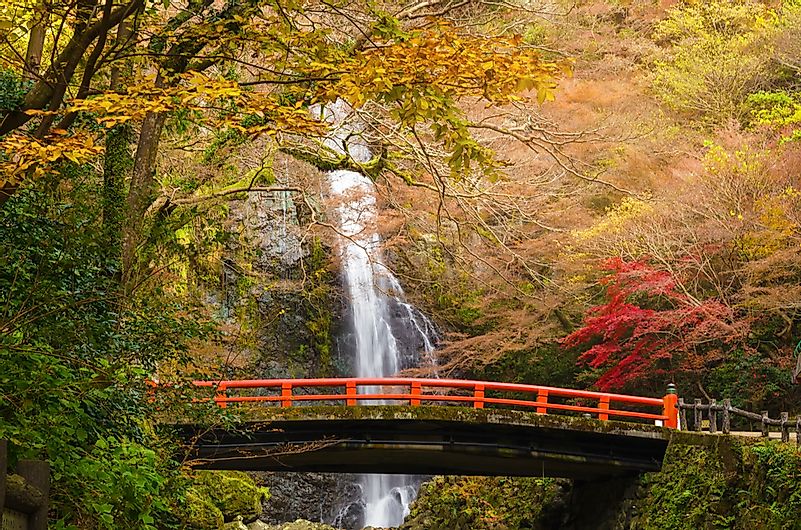 The Taiheiyo Evergreen Forests ecoregion is classified in the temperate broadleaf and mixed forests Biome. The ecoregion lies on the Pacific Ocean (Taiheiyo) side of the Honshu, Kyushu and Shikoku Islands and it straddles a landscape of plains, hills, rivers, low mountains, and streams. Laurel weaves and oak tree species dominate the forests. Much of the ecoregion has been compromised by agriculture and urbanization. Some of Japan’s largest urban areas such as Tokyo and Osaka lie in the ecoregion. The region is subsequently listed as critical.

​Other Ecoregions Of Japan

The rest of Japan’s nine forest ecoregions are Hokkaidō montane conifer forests; the Nansei Islands subtropical evergreen forests; Nihonkai evergreen forests; Ogasawara subtropical moist forests and Taiheiyo montane deciduous forests. Other marine ecoregions in Japan are the East China Sea; Kuroshio Current; Ogasawara reefs; Oyashio Current; Ryukyu reefs and Sea of Japan. In the pursuit of industrialization, deforestation, infrastructure, and land transformation for agriculture have all had negative impacts on Japan's ecoregion. Government and societal efforts are however working to minimize the environmental impacts of industrialization.

What Are The Ecological Regions Of Japan?

Japan has many terrestrial, freshwater, and marine ecoregions by virtue of its position at the convergence of the Oceania, Indomalaya, and Palearctic ecozones. Tropical and subtropical moist broadleaf forests, temperate broadleaf and mixed forests, temperate coniferous forests are Japan’s terrestrial ecoregions. Sakhalin, Hokkaido, and Sikhote-Alin Coast, Lake Biwa, and Honshu-Shikoku-Kyushu are the freshwater ecoregions of the country. The Sea of Japan, Sea of Okhotsk, Kuroshio Current, etc., are the marine ecoregions of Japan.

This page was last updated on August 21, 2019.
By Benjamin Elisha Sawe

The Ecological Regions Of Japan