The current flag of Paraguay was officially adopted on November 25, 1842.

The flag is modeled after the colors and shape of the French Tricolore, and collectively it represents liberation. The Sun of May in the centered crest is considered a symbol of freedom, and it's found on numerous South American flags. 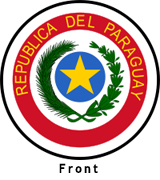 The Paraguay Coat of Arms is unusual because it has a front and reverse side. The front side is round, with a white background and red border. The red border bears the official name of Paraguay. To the left is a green palm branch and to the right a green olive branch. In the middle there is a five-point yellow star. 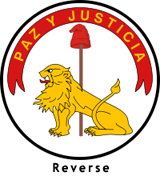 The Reverse of the Coat of Arms features a lion, in front of a staff and liberty cap, with the inscription "Paz Y Justicia", which means "peace and justice". The reverse of the seal is used by the Supreme Court of Paraguay, and is featured alongside the obverse on banknotes of the national currency, the Guaraní and the reverse side of the flag.