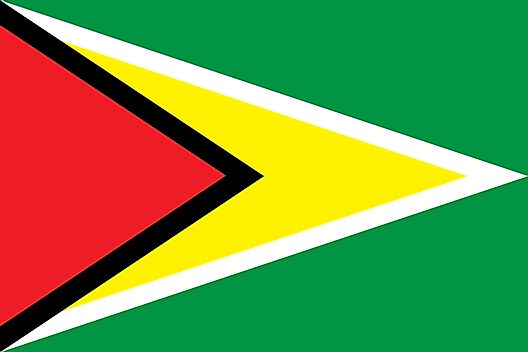 The current flag of Guyana was officially adopted on May 20, 1966.

The red is said to represent the dedication of the people for reform, yellow is the symbol of wealth, green represents the vast forests and the yellow arrow is symbolic of a bright and hopeful future. 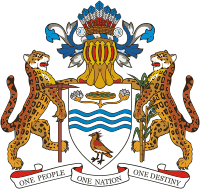 The Guyana Coat of Arms includes a crest of an Amerindian head-dress symbolizing the indigenous people of the country, this crest is also called the Cacique's Crown. The two diamonds at the sides of the crown represent the mining industry. The two jaguars are supporting the shield and holding a pick axe, sugar cane, and a stalk of rice. The pick axe, sugar cane, and stalk of rice represent Guyana's mining, sugar and rice industries, respectively.

The shield is decorated with the Guyana's national flower, the Victorian Lily. The three blue wavy lines represent the three main rivers of Guyana. The shield also include the national bird, the Canje Pheasant. The national motto, "One people, One Nation, One Destiny", appears on the scroll below the shield.