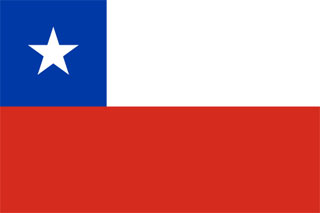 The current flag of Chile (shown above) was officially adopted on October 18, 1817.

The flag is modeled after the U.S. Stars and Stripes. Blue represents the color of the high-mountain skys, white is symbolic of the snow in the Andes Mountains, and red symbolizes the blood shed during the long struggle for independence from Spain.

Chile's coat of arms is made up of a figurative background divided in two equal parts: the top one is blue and the bottom, red. A five pointed white star is in the center of the shield. On the right is a condor, the most significant bird of prey from the Andes, and on the left is a huemul, the most singular and rare mammal of the Chilean territory. Both animals have on their heads the navy's golden crown which is a symbol of the heroic deeds of the Chilean Navy in the Pacific Ocean.

Atop the shield stands three feathered crests; each feather bearing one color: blue, white and red. This crest was a symbol of distinction that former Presidents of the Republic used to wear on their hats. Underneath the coat of arms there is a white band with the motto: "Por la Razón o la Fuerza" ("By reason or by force"). 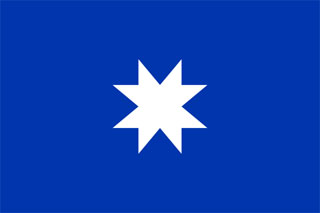 All about the Fishing Industry