Melanesian peoples first settled the Solomons  some 4,000 years ago--it is believed that Papuan-speaking settlers arrived as early as 30,000 BC

In the 16th century the Spanish (searching for gold) were the first Europeans to build scattered settlements here. All eventually failed, and the British subsequently established a protectorate over the Solomon Islands in 1893. It was then seized by the Japanese in 1942.

During World War II, some of the heaviest fighting of that war occurred in the Solomons, with the bloodiest and most decisive battle fought on the island of Guadalcanal.

After decades of nationalistic feelings, the Solomons achieved self-government in 1976, and independence from the UK in 1978. They remain a member of the British Commonwealth today.

The major industries are agriculture, forestry and fishing.

The flag of the Solomon Islands was officially adopted on November 18, 1977.

The five white stars represent the five main island groups. Blue is said to represent the surrounding ocean; green represents the land, and the yellow stripe is symbolic of sunshine.

Extending about 900 miles (1,448 km) in total length, the Solomons are a wide-spread archipelago of mountainous, (heavily forrested) volcanic islands (some active), and a few low-lying coral atolls.

Included in the mix are six major islands and approximately 1,000 smaller islands, all ending in the Santa Cruz Islands of the far southeast.

ATTRACTIONS: (a few major)
The hidden paradise of the Solomon Islands boasts coral-ringed beaches and mountains covered in rainforests, with traditional villages sprinkled across the islands.

Tourism is a growing economic impact, however, and travelers are warned to be aware of potential ethnic violence and a rising crime rate.

Weather in the Solomons is generally warm and humid, though local temperatures are rarely excessive due to prevailing trade winds. Daytime highs are normally in the mid-80s.

November through March is the rainy season, with slightly warmer temperatures throughout the islands. 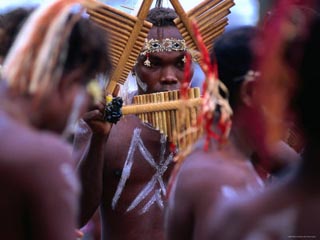 Man playing a panpipe, Solomon Islands...
by Peter Hendrie
Buy This at Allposters.com 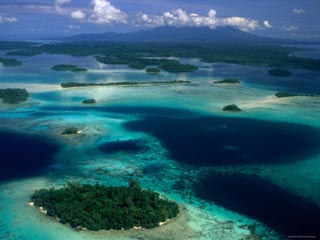 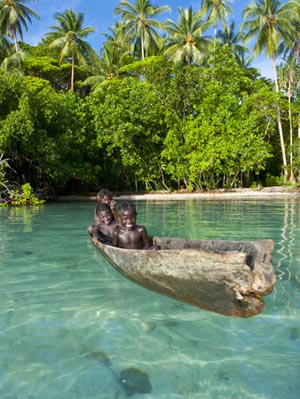 by Michael Runkel
Buy This at Allposters.com 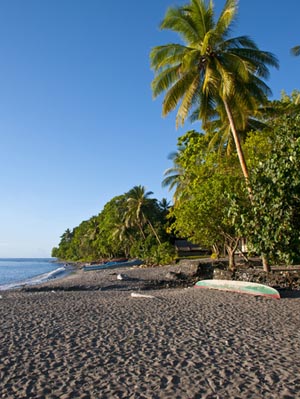 Beach on Savo...
by Michael Runkel
Buy This at Allposters.com