Located in southwest Kansas, legendary Dodge City sits on the banks of the Arkansas River and atop the world's largest underground water table, the Ogallala Aquifer. The surrounding Red Hills are a source of bountiful wildlife and hunting is popular both with locals and Dodge City visitors.

Fort Dodge was built in 1865 to protect the wagon trains and U.S. mail and supply troops for the Indian Wars. The 'Wickedest Little City in the West' was officially born in 1872, growing up around the sod home of a local cattle rancher.

Dodge City was a major stop along the historic Santa Fe Trail, the great wagon train and trade route between Franklin, Missouri and Santa Fe, New Mexico used until 1880. This prairie town was also the buffalo capital of the U.S. for three years until massive slaughters wiped out the herds.

For a decade ending in the mid-1880's the town was a major destination of cattle drives. With so many drifters, buffalo hunters, ex-soldiers and gunslingers converging on the town, Dodge City became legendary for its lawlessness. With a population of only 1,200 in 1876, Dodge boasted 19 liquor serving establishments!

Famous Kansas peacekeepers did make it into town eventually, including Bat Masterson and Wyatt Earp, bringing the long arm of the law and plenty of fodder for old western stories of glory.

Today Dodge City thrives with a tourism based on the mystique of the cowboy and the legends of the Old West. For anyone intrigued by the life of the gunslinger, this is a must stop on your Kansas vacation.

This Kansas city is rich with attractions, including the 38 foot Coronado Cross which marks the spot where this famous Spanish explorer crossed the Arkansas River in 1541 in search of his 'Cities of Gold.'

Check out the Dodge City attractions map for these other great things to do on a Kansas vacation: 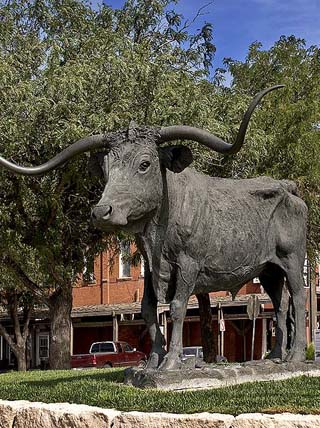 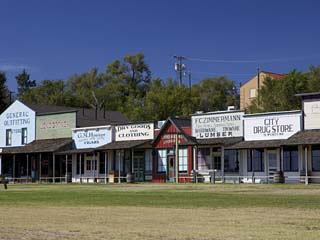 Front Street...
by Simon Montgomery
Buy This at Allposters.com

This page was last updated on October 2, 2015.
WorldAtlas