"The Wilderness City" is the capital city of the Canadian territory of Yukon. Living up to its nickname, the city of Whitehorse is surrounded by hiking trails and the Yukon River flows directly through its heart. Trails and parks line the banks of the river, and although Whitehorse may be known for its wilderness, it also boasts the comforts of a contemporary city.

Whitehorse is constantly moving forward while still embracing its past. The city welcomes performers from all over the world and hosts various festivals each year, including the Yukon International Storytelling Festival and the Frostbite Music Festival. The city takes pride in the culture and traditions of its First Nations people of the Kwanlin Dun and Ta'an Kwäch'än.

With its humidity-lacking summers and relatively mild winters by Canadian standards, Whitehorse has one of the most comfortable climates in Canada. Since its dry climate results in very little precipitation, visitors and residents alike can enjoy its naturally scenic beauty year-round.

Located in the south-central part of Yukon, Whitehorse is within traveling distance of many of Yukon's major landforms like the Watson Lake on the British Columbia border, the Selwyn Mountains, and the Mackenzie Mountains, which rest on the line between Yukon and the Northwest Territories.

Check out the following great things to do on your Yukon vacation adventures: 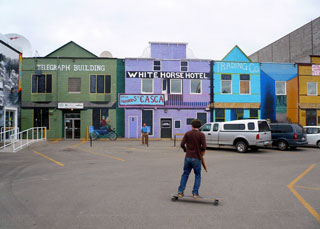 Former Spanish Colonies of the World