Located on remote Baffin Island in Nunavut territory, Iqaluit was founded in 1942 as an American airbase and the name means "place of many fish" in Inuktitut.

It has the distinction of being the smallest Canadian capital in terms of population with just over 6000 people as well as the only capital not connected to other settlements by a highway.

A last frontier and gateway to the fabled arctic north, Iqualuit is known for its unique Inuit culture and intrepid people. With very cold long winters and short cool summers, Iqaluit temperatures ranges from a frigid -33C to a comfortable 10C (-27F to 50F). The only city for thousands of miles in any direction, the nearest cities include Quebec City, Montreal, and Halifax all about 2000 miles away to the south.

While one of the most remote cities in the world, this Canadian vacation adventure offers a chance to live at the edge of civilization, experience the warm hospitality of the Nunavut people, and some of the most awesome natural beauty on the planet. Seals, walrus, beluga whale, polar bear, and a variety of sea birds, including eagles and arctic terns, make up the wildlife of this remote North American city.

Read on for some great places to visit in Iqaluit, Nunavut: 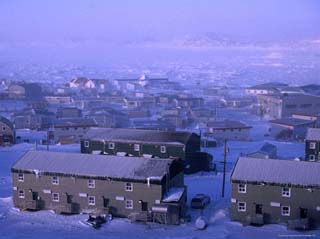 A spring blizzard engulfs Iqaluit...
by Grant Dixon
Buy This at Allposters.com 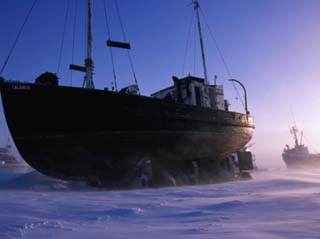 Fishing boats beached on the shore of Frobisher Bay...
by Grant Dixon
Buy This at Allposters.com