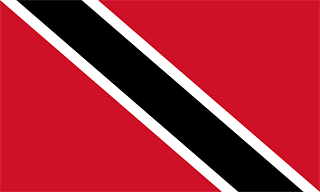 The flag of Trinidad and Tobago was adopted on August 31, 1962, and consists of a red background with a white and black band diagonally placed across the upper left corner to the bottom right corner.

The two white stripes are symbolic of the bountiful sea, the red represents the people, and black represents their hard work and strength.

Trinidad and Tobago Coat of Arms: 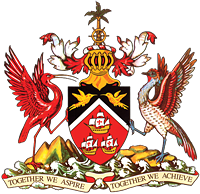 The shield of the coat of arms contains the same colors as the nation's flag, and carry the same meaning. The gold ships within the shield represent Christopher Columbus' ships: the Santa Maria, La Nina, and La Pinta.

The two birds above the ships, in the black section, are hummingbirds representing the more than sixteen different species of hummingbird that have been recorded on the island of Trinidad. On the left side of the shield stands a Scarlet Ibis, while on the right is a Cocrico. Below the Scarlet Ibis are three hills, representing the Trinity Hills in southern Trinidad.

Those were the hills that Christopher Columbus saw during his visit to the islands, and what prompted him to give the name, "Trinidad." The island rising out of the waters beneath the Cocrico represents Tobago, and below these birds is the nation's motto, "Together We Aspire, Together We Achieve."