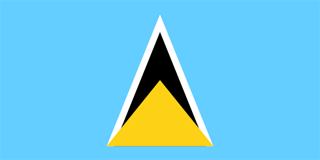 The blue field represents the Caribbean Sea, and the triangles symbolize the island's famous Pitons - the twin volcanic peaks. 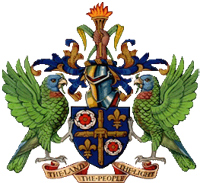 The torch is a beacon to light the path to the future. On the ribbon below the shield is the national motto, "The Land, The People, The Light". The shield is held up by two St. Lucia parrots.