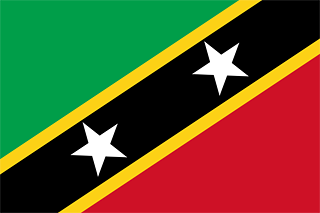 The flag of St. Kitts and Nevis was officially adopted on September 19, 1983.

The green color is said to be symbolic of the fertile land, black recalls the African heritage of St. Kitts, and red the overall struggle for freedom. The two white stars represent hope and liberty. 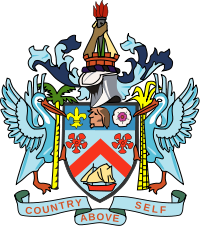 The Saint Kitts and Nevis Coat of Arms displays the motto "Country Above Self". The center of the coat of arms is dominated by a shield, at the base of which is a ship.

A helmet topped with a tower appears with a flaming torch upheld by the hands of an African, European, and a person of mixed descent. The torch signifies the struggle and quest for freedom by a people of diverse ethnic origins, but united in purpose. The shield is supported on either side by pelicans, displaying a sugar cane plant and the coconut palm tree - which are extensively cultivated throughout Saint Kitts and Nevis.