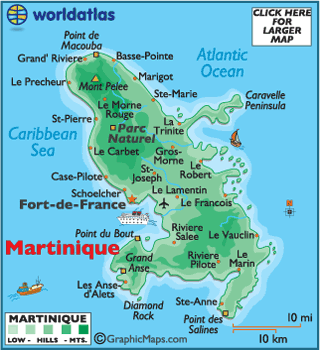 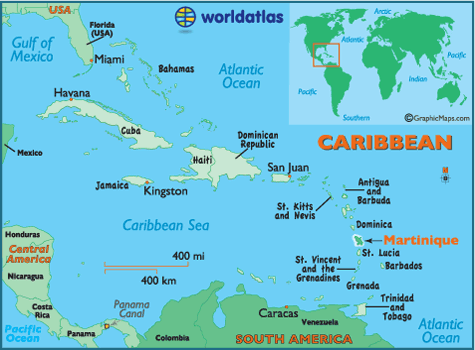 Martinique was originally inhabited by Arawaks from South America, and the majority of those early inhabitants were killed by an eruption of Mount Pelee in 295 AD.

Near 400 AD, the long-vanquished Arawaks returned to the island. Around 600 AD, the cannibalistic Caribs arrived, exterminated the Arawaks and permanently settled on the island.

Columbus charted the island in 1493, then landed on Martinique (near Le Carbet) in 1502 during his fourth voyage to the 'New World.' However, the Spanish found little value here, and sailed south for greener pastures.

In 1635, from the island of St Kitts, the French sent a group of one hundred settlers to Martinique; they built a small settlement and over the next few decades they took control of the island, and destroyed many of the Caribs that still called it home.

In short order the growing and trading of sugar became the major business on the island, and by order of King Louis XIV, African slaves were forced from their homelands to work the plantations as slaves.

For over one hundred and fifty years, slavery, and slave revolts, would be a major influence on the economy and politics of the Martinique.

After on-going battles with the Carib Indians, the Seven Years' War with the English, and additional periods of British control, the French took firm control in 1815.

In 1848, the French government signed an Emancipation Proclamation document, which ended all slavery in the French West Indies. However, indentured laborers from India were brought to arrive in Martinique to replace the black slaves.

Adding misery on top of misery, the world market for sugar began to collapse in 1921, and island cultivators sought a new crop. In 1928 they introduced bananas, which along with sugarcane, tourism, and light industry form the island's economy today.

As a long-time French colony, Martinique was declared an official French overseas department in 1946, and the island's beauty, charm and historical sites continue to attract visitors from around the world.

Fort-de-France, fronted by lush, green mountains, surrounds a yacht-filled harbor, and is one of the most strikingly beautiful ports in the Caribbean. 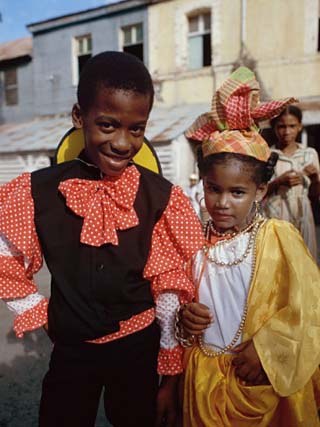 Martinique children at a festival...
Buy This at Allposters.com 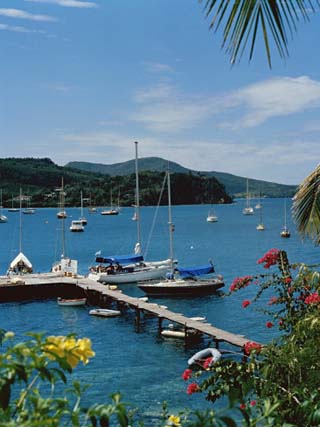 Trois Islets...
Buy This at Allposters.com