Grasshoppers and locusts are closely related insects belonging to the Acrididae family. Locusts are actually grasshoppers that develop gregarious behaviors under optimum environmental conditions which involve the presence of large populations of grasshoppers. Locusts are not a species. The two insects are primarily herbivores feeding on any green matter they come across and are sometimes regarded as agricultural pests when they feed on agriculture produce. Both grasshoppers and locusts are consumed in some parts of the world where they are regarded as a rich protein source.

Locusts are grasshoppers which develop gregarious characteristics in suitable environmental conditions forming an organized group. Such conditions are particularly driven by a period of dense vegetative growth after a dry spell. Drought drives locusts to crowd in small areas where there is vegetation. Locusts then abandon their solitary phase as grasshoppers and reproduce at dramatically high rates forming bands of nymphs and swarms as adults. The transition from the solitary phase is triggered by the secretion of the hormone serotonin which has been linked to boosting moods in humans. In their swarms, locusts move in a single direction making stopovers on any green area they notice. This movement causes extensive damage to crops. Locusts are known to cover long distances in short periods leaving behind a trail of damage. 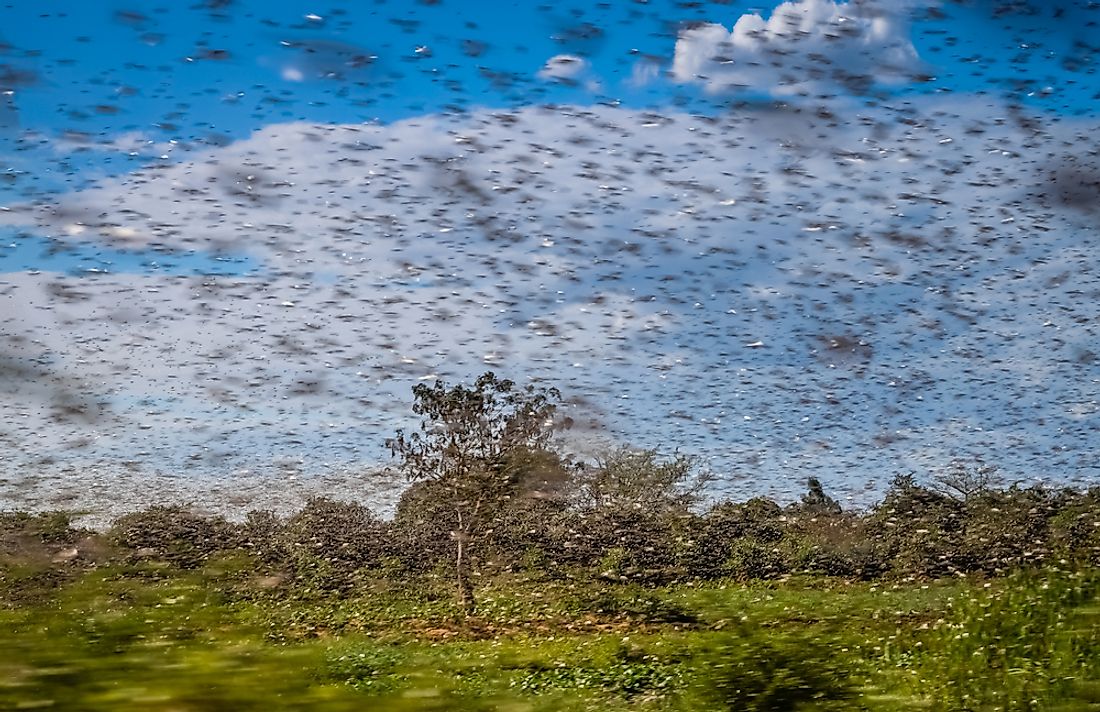 A swarm of locusts.

Structural Differences Between Locusts And Grasshoppers

Though similar in appearance, grasshoppers differ structurally from locusts. Both also differ in their behavior. In grasshoppers, the front wings are thin and tough while the outer wings are wide and flexible. In locusts, the wings become longer and stronger to allow for long-distance flights. The body of locusts is smaller than that of grasshoppers. In their solitary states, female locusts are larger than their male counterparts, although their sizes do decrease in the swarming phase.

Behavioral Differences Between Locusts And Grasshoppers

Grasshoppers are primarily solitary creatures throughout their lives, coming together only for reproduction. Though locusts may be found in isolation, they mostly occur in groups in which they forage, bask and roost. Grasshoppers are relatively sedentary species maintaining the same habitat for long periods. Grasshoppers only move when threatened and during feeding. Locusts, however, are migratory species often shifting from one area to the next in search of food. Even in their solitary states, locusts are still known to fly over long distances.

Human Interactions With Locusts And Grasshoppers

Grasshoppers and locusts are used as a food resource by humans. They are also treated as pests for their ability to destroy crops, a problem that has plagued farmers for centuries. Thus, pesticides and biological methods of controlling these insects have been developed by researchers. Locusts help farmers prepare for droughts as swarms of locusts in an area indicate the arrival of a dry period.

What are the Differences Between Locusts and Grasshoppers?

Grasshoppers and locusts are closely related insects both in the Acrididae family. Locusts are grasshoppers that develop gregarious behaviors under optimum environmental conditions which involve the presence of large populations of grasshoppers.

This page was last updated on August 1, 2017.
By Benjamin Elisha Sawe