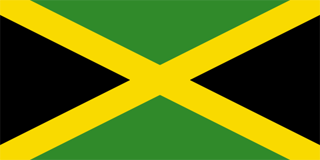 The flag of Jamaica was adopted on August 6, 1962, and consists of a gold saltire, which divides the flag into four sections: two of them green and two black. The present design emerged from those sent in by the public in a national competition.

It was originally designed with horizontal stripes, but this was considered too similar to the Tanganyikan flag, and so the saltire was substituted. The color black represents the strength and creativity of the people which has allowed them to overcome the odds, yellow for the golden sunshine and green for the lush vegetation of the island. 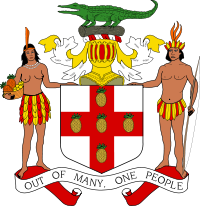 The coat of arms depicts a male and female member of the Taino tribe standing on each side of a shield, which bears a red cross with five golden pineapples. The crest shows a Jamaican crocodile mounted on the Royal Helmet of the British Monarchy and mantling.

At the base of the shield a ribbon displays the national motto, "Out of Many, One People."