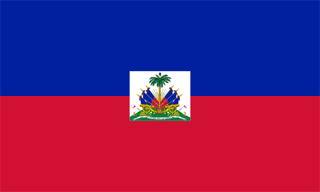 The flag of Haiti was officially adopted on February 25, 1987.

As a former French colony, the blue and red colors are modeled after the French Tricolore. The national coat of arms (shown) depicts a trophy of weapons ready to defend freedom, and a royal palm for independence. 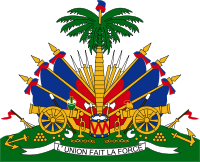 The coat of arms of Haiti shows six draped flags of the country, three on each side, which are located in front of a palm tree and cannons.

In front of the cannons are a drum, a bugle, long guns, and ship anchors. Above the palm tree, there is a Phrygian cap placed as a symbol of freedom.

Just above the ribbon with the motto are two pieces of chain with a broken link symbolizing the broken chain of slavery. On the ribbon is the national motto of Haiti "L'Union Fait La Force" which means "Union Makes Strength".