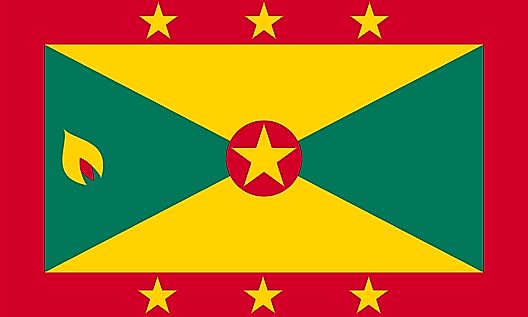 On his third voyage to the New World in 1498, Columbus sailed by Grenada (the island) and named it Concepcion. It now has a population of 109,590 and celebrates their national day on February 7th.

The British attempted a small settlement in 1609, but it was the French that successfully battled the indigenous cannibalistic Carib Indians, finally driving them off the island in 1651.

The French named their new conquest La Grenade, and established a capital known as Fort Royal (now St. George's), and for many decades is prospered as a French colony, with sugar its primary export.

As part of the '1763 Treaty of Paris' that ended the Seven Years' War in Europe, the British took control of the island from the French in 1763.

Like all of the British colonies and possessions in the Caribbean, African slavery and civil rights were also on-going hot-button issues in Grenada.

Then, in 1983, Grenada was seized by a Marxist military group. This action facilitated an invasion by U.S. forces and those of six other Caribbean nations; they captured the ringleaders and hundreds of Cuban advisers and free elections were re-established the following year.

On September 7, 2004, after being hurricane-free for forty-nine years, the island received a direct hit from Hurricane Ivan; the damage was catastrophic, with over 90 percent of Grenada's homes either damaged or destroyed.

The country's determined citizens, government actions and international financing brought the island back to life, and by the end of 2005, Grenada was back in business, including tourism facilities.

The modern country of Grenada includes the large island of Grenada, and a few smaller islands on the southern edge of the Grenadines, with Carriacou and Petit Martinique the most significant.

Volcanic in origin, Grenada is dominated by a central ridge of mountains, all covered with lush rainforests. The island is blessed with numerous bays and harbors, and some of the best beaches in the Caribbean.

Once famed only for its indigenous spices (namely mace and nutmeg), Grenada's modern focus is tourism, and the islands are deservedly garnering the attention of the travel industry once again.