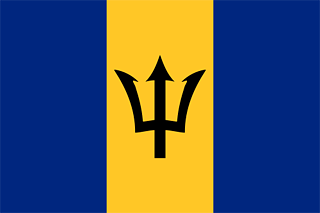 The national flag of Barbados was officially adopted on November 30, 1966. It consists of two blue outer bands separated by a golden middle band, and a black trident-head in the center. The two blue bands are said to stand for the ocean, while the gold is for the sand on the island.

The trident is taken from the old colonial badge, which showed Britannia holding a trident. The broken lower part symbolizes a symbolic break with its historical and constitutional ties as a former colony. The three points of the trident represent the three principles of democracy - government of, for, and by the people. 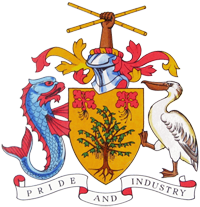 The coat of arms of Barbados was adopted in 1966 by decree of Queen Elizabeth. Like other former British possessions in the Caribbean, the coat of arms has a helmet with a national symbol on top, and a shield beneath that is supported by two animals.

The national symbol is the fist of a Barbadian holding two sugar canes that are crossed to resemble St. Andrew's Cross. This is representative of the importance of the sugar industry as well as Barbados celebrating its national independence day on St. Andrew's Day. The golden shield contains the national flower, known as the Pride of Barbados, and a single bearded fig tree. The shield is supported by a dolphin fish and pelican. They stand for the Pelican Island, and fishing, respectively.

At the bottom is Barbados' national motto ("Pride and Industry") on a scroll.