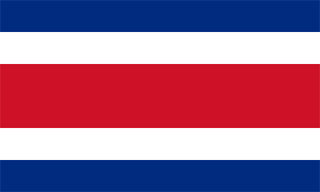 The flag of Costa Rica was officially adopted on September 29, 1848. The blue and white are the original colors used by the United Provinces of Central America, while the combined red, white and blue are modeled after the colors of the French Tricolore. The country's coat of arms is found on the red panel and the three volcanoes in the country are featured. 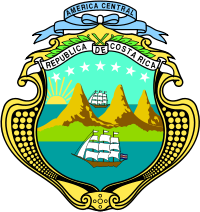 The Coat of Arms shows three volcanoes representing the country's three mountain ranges and a valley. These divide two oceans where ships are sailing, symbolizing the sea ports of the Pacific and the Caribbean Ocean.

The seven stars stand for the seven provinces of Costa Rica, and the rising sun commemorates the birth of the new nation. At the top of the coat of arms there is an inscription that reads: "Central America"!