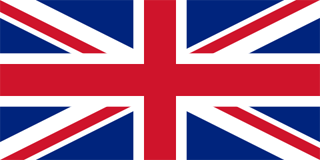 The United Kingdom flag was officially adopted on January 1, 1801, and it's arguably the world's best known flag.

In short, this striking flag is actually a composite of England's St. George's Cross (the centered red cross bordered in white), St. Andrew's Cross of Scotland (the diagonal white cross on the blue field), and the Patron Saint of Ireland (diagonal x-shaped red saltire). 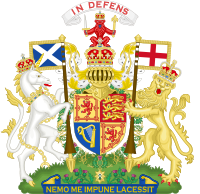 The Coat of Arms also contains Latin phrases meaning "God and my right" and "Shamed be he who thinks ill of it".

These arms are used by the Queen or King in their official capacity as monarch, and are officially known as the Arms of Dominion.