From 5500 to 2750 BC the area of present day Moldova was inhabited by a large civilization known as the Cucuteni-Trypillian culture.

They created agriculture and animal husbandry techniques; built large settlements, and in the end the Trypillian culture became one of the most culturally advanced of its time across Europe.

However, towards the end of the Neolithic period advancements waned, and the region of Moldova became a mecca for outsiders now moving into Europe.

Between the 1st and 7th centuries AD, the Romans ruled, followed by the Byzantines. Then, because of the desirable location, numerous invasions continued on through the 1500's, including those by the Goths, Huns, Avars, Bulgarians, Magyars, Pechenegs, Cumans, Mongols and Tatars.

Finally in 1538, the Principality of Moldavia, as it was then known, was snatched up by the (Turkish) Ottoman Empire, and remained under their control for the next few hundred years.

Although the region was able to hold onto some of its autonomy, the Treaty of Bucharest of 1812 had the Ottoman's surrendering the eastern half of the Principality of Moldavia (as well as Khotyn and old Bessarabia) to the Russian Empire, and the region became known as "Oblast of Moldavia and Bessarabia."

For clarification purpose, Bessarabia was an historical term for the geographic region in Eastern Europe bounded by the Dniester River on the east and the Prut River on the west. In short a most of modern-day Moldova.

When World War I began in the early 1900's across Europe, an estimated 300,000 Bessarabians were drafted into the Russian Army. This fueled Bessarabia to announce their independence from Russia in 1918.

Subsequently, Bressarabia was put under Romanian rule along with the rest of Moldavia, and remained so for the next 22 years.

The Russian's refused to let go so easily, and in 1939, along with Nazi Germany, they signed the Molotov-Ribbentrop Pact which held a secret protocol recognizing Bessarabia as part of the Soviet sphere of influence. 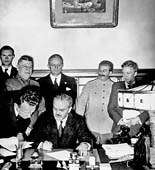 Following a treaty in 1940, Russia and Nazi Germany set forth in giving Romania an ultimatum to hand over Bessarabia, as well as northern Bukovina (which they did).

Due to this changing of hands, World War II became a violent tug-of-war for Moldova between the Russians and Romanians, but at wars end, the country remained under Soviet rule.

Throughout the Stalinist period (1940-1941, 1944-1953) thousands upon thousands of Moldovans were deported to Siberia and to northern Kazakhstan, where they were persecuted and murdered without mercy.

After Stalin's death, the persecutions switched from groups to individuals, and even independent businesses and organization were routinely punished to set an example.

By 1988 Moldova began their fight for independence, and freedom fighters organized a mass protest in Chisinau.

Finally, on December 26, 1991, the Soviet Union fell, and in March of 1992 Moldova was formally recognized as an independent country.

After a rough start during the first few years, a start that led this new country into a serious state of economic decline, Moldova became a member of the Council of Europe in 1995 and the economy began to stabilize.

New governments were created in the late 90's, by Ion Sturza and Dumitru Braghis, and a new amendment was added to the Constitution changing the country from a presidential to a parliamentary republic.

This made Moldova the first post-Soviet state in which a non-reformed Communist Party returned to power.

Well known for its natural landscapes and wine making, as well as for establishing a visa-free system for travelers from the US, Canada, Japan and European Union countries, Moldova is fast becoming a popular must-see European tourist stop.

Notable areas of interest include the capital city of Chisinau, and the various monasteries and museums situated across the country.

Countries With The Lowest Rates Of Diabetes

What Was The Warsaw Pact? Who Signed It?