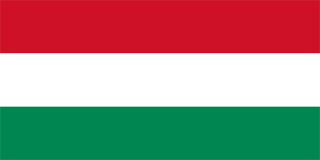 The current flag of Hungary was officially adopted on October 1, 1957, but it was first used in 1848.

The overall design is modeled after the French Tricolore. Red is said to symbolize strength, green is hope and white is faithfulness.

Hungary's coat of arms dates back to the Middle Ages, but wasn't reinstated until July 3, 1990, after the communist rule came to an end. It is composed of a shield split into two parts, and the Holy Crown resting on top.

The right side of the shield (the sinister) contains a double cross inside of a small golden crown, both of which sit on top of three green hills. The hills represent the Tatra, Matra and Fatra ranges.

The left side (the dexter) contains alternating red and silver stripes (four each).