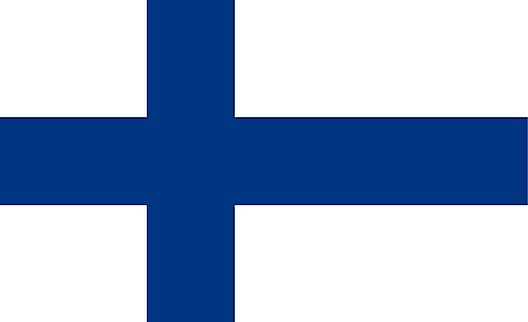 During the last Ice Age, Finland was covered by a thick layer of ice. When that ice sheet retreated (or melted) about 10,000 years ago, it gouged the surface of the land and left in its wake innumerable islands, rivers and streams, as well as an estimated 188,000 lakes. Note that near 60,000 of those lakes measure more than 200 meters wide.

Finland is a mostly flat land, with more than 70% of it covered by thick forest. In the southern areas, water seems a more common sight than land as countless clear water lakes are everywhere.

To the north of the Arctic Circle, the terrain rises into the hills and low mountains of Lapland. The country's highest point, Haltiatunturi, at 1,328 meters, stands on the edge of its border with Norway.

The Aland Islands (archipelago) sits in the middle of the Gulf of Bothnia between Finland and Sweden. It contains almost three hundred islands (80 inhabited), and over 6,000 small (tiny) rocky islands.

Directly east, in the Archipelago Sea and merging with the Aland Islands and Finland's southwestern coastline stand literally tens of thousands of islands, mostly small, with some of the larger ones inhabited.

In this land of lakes, the largest include Nasijarv, Oulujarvi, Paijanne, Pielinen and Finland's largest, Lake Saimaa. With a few exceptions, the balance of Finland's lakes are on the small side.

Finland's most significant rivers include the Kemi, Luiro, Muonio, Oulu, Teno and Torne.

Numerous canals flow lake to lake in the south. The largest, the Saimaa Canal, connects Lake Saimaa with the Gulf of Finland.