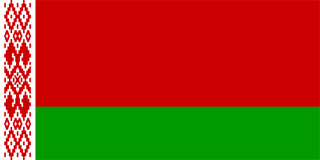 The dominant red and green were colors used on its flag when it was a republic of the former Soviet Union. The woven fabric ornament on the left uses traditional Belarussian red and white colors. 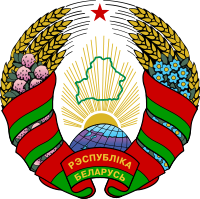 The coat of arms of Belarus (considered an emblem) replaced the historic Pahonia arms in 1995, and is composed of a red and green ribbon wrapped around stalks of wheat and flowers.

In the middle of the emblem the rays of a sun shine through the outline of the country, which hovers above a globe depicting part of Eurasia. At the top of the emblem is a red five-pointed star.